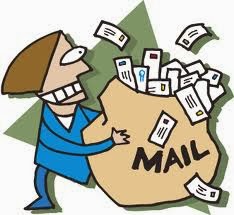 Mail.  As funny as it sounds some of my earliest memories involve receiving mail.  As a child I remember the excitement of walking to the mailbox, standing on my tippy toes and reaching inside to retrieve the envelopes inside.  Granted, at that age there was rarely anything addressed to me, but that didn't matter.  My senior year in high school I would stalk the mail man waiting for the arrival of my college acceptance letter.  Then during my college years mail evolved into something coveted by the entire campus.  Ironically my designated mailbox in the basement of the student center was on the very top of the stack meaning I still had to stand on my toes to see inside.  But spotting a yellow card stock slip inside, the sign that not only did I have envelopes, but I had actual packages, was beyond exciting.

Fast forward a few decades and living overseas the twice weekly arrival of mail is beyond exciting.  My mailbox is still on the very top of the stack, viewable only when I am wearing high heels, and is more apt to be filled with bills than personal correspondence, but that doesn't matter.  Sometimes there are magazines and other glimpses of home.  The much anticipated email sent out to the embassy community announcing who has received packages immediately initiates a flow of traffic to the mailroom similar to ants following a line of crumbs.  For many of us, online shopping is our lifeline to our American world since everything from FDA approved medicines and favorite foods to Christmas presents and items that are impossible to find in Albania arrives via mail.

Because all of our mail arrives through the Embassy, we are able to have a U.S. based mailing address where we can receive not only items shipped through the postal service but also via FedEx and UPS.  Although there are strict requirements as to the content, size, and shape of what can be sent, the world is literally at our virtual fingertips.  Items arrive at our northern Virginia address within days of being ordered before they begin their slow and often unpredictable transit across the Atlantic.  Because of this, I've become even more of a planner than ever.  Medicines are reordered months before I run out and Christmas has been shopped for before the end of September.  Sometimes it only takes a matter of days for packages to arrive and other times it can be weeks, or as has been the case at least once a year since we arrived, months.  And then there are the times when packages simply don't arrive.

I guess I have been lucky since this has only happened to me twice over the course of the past two and half years.  And given the frequency of which I shop, my batting average is pretty darn good.  But all of the good odds in the world don't matter when a much coveted item never appears.  My first no-show item was a new Ann Taylor dress, ordered in mid-March with the intent of wearing it for a reception in mid-May. It was a splurge but I clicked "order" and anxiously awaited its arrival.  And I waited.  March became April which eventually became May and still no dress.  Ann Taylor claims the package was delivered to my mailing address but ten months later I have yet to receive it.  I've all but given up on it but have been assured that should it arrive after we have departed Albania, it will be forwarded to our new address.  And that would mean a package in my mailbox, right?

My second disappearing package was more recent and a lot less costly.  In October I carefully counted out our remaining number of Splenda packets and calculated how many we would need to see us through until our move.  Wanting free shipping, I also bought two tubes of our favorite American branded toothpaste and hit the order button.  Once again, the order went through and was delivered to our address but has yet to appear here in Albania.  It is by no means the end of the world; as of last week we've taken to using plain old white sugar in our coffee and I bought a tube of Greek produced toothpaste in a local grocery store.  Once again I've been told that should this box arrive after we depart in a few weeks it will also be forwarded on to us.  At that point it will be sort of moot since Splenda and American toothpaste will be readily available to us.  But should it show up, I'm sure I'll be unnecessarily excited because I will once again have another package.  Some things really don't change.... (although this time around I am hoping for a mailbox at a lower level).
Posted by Zosia at 12:30