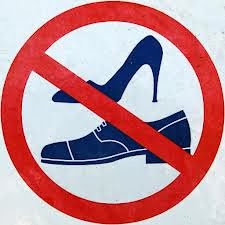 Shoes? No shoes?  They are required for service in most business establishments but what about your own home?  This is a conversation that popped up on my Facebook page recently.  The question at hand was whether you wear shoes in your own house or immediately remove them upon entering.  Taking the conversation one step further was the question of whether or not guests were expected to remove their shoes upon entering your house.  Sounds simple (or even silly depending upon where you are coming from) but you would be surprised at the debate this question ignited.  Apparently the issue isn't quite as simple as it may initially appear.

Growing up my mom fought an ongoing battle with us kids about removing our shoes when we entered the house.  Granted, during the winter months in New England it was a give-in that we weren't going to wear our dirty and snowy boots indoors (well, my brother thought differently but that is another story for another day).  It wasn't until I lived on my own and was responsible for my own housekeeping that I noticed how much dirt and grime got tracked into the house simply by wearing outdoor shoes inside.  Suddenly I became a convert to going shoeless in the house and I found that I rather liked the feel of clean floors under my bare feet.  (But that is in my own home!).  When Sidney was a baby and moved into his crawling phase I became even more vigilant about not wearing shoes that had been outside in the house.  His daycare center was good about instituting this practice as well, issuing each parent their very own set of booties to slip on over their shoes during drop off and pick up time.  Not everyone remembered to remove them however; it was a common sight to see a military officer in uniform walking out the door of the building still wearing their blue paper slippers.

When we arrived in Albania, where everything is covered in a fine layer of dust, and found ourselves in a house with tile floors, our habit of going shoeless inside continued.  (Because of the house is always cold we are apt to wear slippers instead of going barefoot).  Both our nanny and our housekeeper showed up on their first day of work toting plastic "slippers" which they put on the minute they enter the house.  I quickly noticed that these hard plastic sandals are all the rage amongst Albanian women who wear them with socks year around while inside.  Fashionable they aren't but practical they are.  In reality, Albania is a country where most people seem to not wear shoes indoors.  We've never asked our guests to remove their shoes while visiting and certainly don't expect them to, but many do any way.  We have however, been asked to remove our shoes when we have been guests in other people's homes.  This request has always been followed with being provided with our own pair of ill-fitting slippers.  The first time this happened I was slightly aghast at the prospect of wearing someone else's shoes; now I make sure to carry a clean pair of socks in my purse for just such occasions.

When I think about it, this custom just makes sense.  It even has me thinking that perhaps I should invest in a selection of house slippers for our guests to wear in lieu of their shoes when they visit.  What do you think?