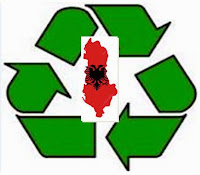 Albanians are alternatively and simultaneously the biggest environmentalists and biggest degraders of the environment.  How can they be both you ask?  I often wonder how this is even possible and the only explanation I can reach is that, like so many other aspects of Albanian society, activities are done in silos with little communication, coordination or thought about how one's actions may affect others or even themselves at a later time.  Let me explain......

Although I have been told that the conditions have improved in recent years, one only has to look at a roadside, stream bed or even the road itself to see the piles of trash that are strewn everywhere.  I first noticed this on our jet lagged drive from the airport to our new home in Tirana.  As we crossed what I thought was a river I gazed out the window and looked down expecting to see water. Instead I was greeted by the most disheartening sight of piles of trash, debris, and litter clogging what I can only imagine had, at one time, been a free flowing body of water.  This sight was repeated again and again, whether peering over the wall of the fortress in the UNESCO city of Berat, walking along the shores of the Adriatic, driving through remote villages and even hiking along nature trails.  (Really people?  Effort was obviously made to get the trash to such an isolated location but I guess out of one's personal sight is out of mind).  Not a day goes by when I don't see trash--both household or convenience or construction debris-- being thrown out a passing car window or swept out of a yard and into the street.  (My neighbors are really good at doing this).  And it has been with much chagrin that I've watched an ongoing road construction project in our neighborhood. No sooner have the construction workers graded the surface to lay asphalt than someone dumps trash bags and construction debris on top of the recently smoothed surface. Even when there is a dumpster available, trash is often dumped next to it rather inside.  Trash is literally everywhere and since no one seems to care the situation is only getting worse.

Then who are the environmentalists in Albania?  Yes, there is the small but growing number of western minded Albanians who are organizing and encouraging their fellow patriots to act responsibly and clean up their environment.  In recent years the US Embassy has been working with local non-governmental organizations to take a stand and make the environment a priority.  The idea seems to be slowly catching on and momentum is gradually growing.  School children and the next generation are beginning to get involved so I am hopeful that a cleaner Albania will exist one day.  But at the moment, in many respects, the true environmentalists are the very same people who are discarding trash on the side of the road.

Albanians are the original recyclers.  Whether it be plastic grocery bags (the very same ones that clog the country's waterways), furniture, or old appliances, these items get used and reused until they literally fall apart.  (Unfortunately, at this point, they just get discarded in a most un-environmentally friendly way).  Whether it be my housekeeper at home or the char ladies at the embassy, things I throw in the trash are continually being pulled out and placed on the counter or my desk because the are "still good".  A toy car with two wheels missing?  In my mind that goes in the trash but the car in question kept finding its way back into the playroom until I finally buried it in the bottom of a bag and hauled it to the dumpster myself.  At work, I once had to throw away a dried out bottle of white-out three times before finally taking it home and getting rid of it there.  The cleaning lady kept insisting it was still usable and I repeatedly found it placed back on my desk each morning.  The same goes for dried out markers, coffee missing their handles, and even cardboard boxes.  But some of the recycling is indeed practical.  The Roma here in Albania are infamous for digging through dumpsters and salvaging anything and everything.  Single shoes, scrap metal, rags, and empty bottles are all ripe for the taking.  Small appliances, even those that operate on the wrong wattage for Europe, are treasure troves for avid recyclers.  All of these items have uses to this community and are (at least initially) recycled.   Some people argue that dumpster diving by the Roma is what causes the majority of the trash problem.  I'm sure it contributes to the problem but it is in no way the major cause since the items they salvage are reused and recycled.

But Roma aren't the only dumpster divers.  My very own neighbors, the same ones who drive their polished Mercedes and think nothing of sweeping their trash onto the street, are quick to pick through the small dumpster in front of our house.  Because I know that anything I put out there will quickly be scooped up, I've taken to placing most items I no longer need--wearable but no longer needed clothing, old electronics, chipped dishes, etc on the curb and letting people take what they want.  And things disappear quickly.  Yesterday, in a fit of pre-move purging, we placed armfuls of items on the curb.  Within minutes--literally the time it took for me to walk back inside to return with more things-- they were scooped up.  Even the broken tiki torches and the case of long expired fruit juice disappeared in mere seconds.  This, my friends, is recycling in its purest form.  Now if only there was a way to get these very same people to not drop their cigarette butts and empty candy wrappers on the ground.
Posted by Zosia at 15:00