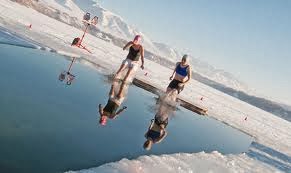 Baby it is cold outside!  I had always heard that when you spent a significant amount of time in a warmer climate your blood thinned, or at least your body, accustomed to a warmer climate had a harder time feeling comfortable when you travelled to a colder place.  I'm not sure whether I believed it or not but after this past week I can now say that I am a believer.  After living in a Mediterranean climate for the past three winters, our travels into northern Europe have chilled me to my bones.

My roots are deep in New England. Spending my childhood in northern Vermont and coastal Maine, cold weather was a fact of life and I rarely gave it a second thought.  In hindsight it might have helped that I probably never felt completely warm from November through April but whatever the reason, I don't remember feeling cold for extended periods of time during my childhood.  Winters were cold but that was the way they were supposed to be.  If you let the weather stop you from venturing out, you could easily find yourself housebound for months on end. But New Englanders seem to thrive on the cold winter weather.  Although I never participated, I knew many people who jumped right into the icy waters as part of the  polar bear plunges each winter.  Yes, that is how people in the north spend their winter days.  I spent my college and early post college years in Massachusetts, a move "south" where I experienced slightly warmer winter temperatures but cold winter weather none the less.  Much to my co-workers' and husband's chagrin, I spent my first winter living in southern Virginia without donning a winter coat.  While everyone else was bundled up I found the temperatures to be mild and not winter like at all.

Fast forward a few years and we found ourselves living in Albania where winter days alternated between cool and damp and warm and sunny.  On all but a handful of days going outside required little more than a sweater or a light jacket.  A "cold" day might necessitate adding a scarf and heavier coat in the morning but by noon neither was necessary.  (Albanians, however, always bundled up throughout the year, claiming that it was cold and fearing the inevitable "breeze" that would make them ill).  For this New England girl, Albanian winters were anything but cold and no matter how many I experienced, they just never felt like winter to me.  During two separate winters, wanting to experience true winter weather we made forays to both Slovenia and Bavaria only to be met with warmer weather than we had back home in Tirana.  So much for winter weather!

But we left Albania last week headed in a circuitous route for Belgium and I don't think my body has been warm since takeoff. First, we flew from Tirana to Sweden which while beautiful in the summer, is dark and cold in January.  Cold as in it hurt us to breathe and see cold.  With temperatures hovering in the single digits I know they were nothing like the polar vortex that struck the United States earlier this month and I doubt that they would have bothered me a few years ago.  But now, they were too much to bear.  Despite his triple layer LL Bean winter coat, my poor son took hours of shivering and a hot bath to fully warm up after we dragged him out to dinner one night.  Germany wasn't much better; in fact, it felt even worse.  First it was windy. Then the dry cold shocked our systems and had us spending our days hunkering down in the hotel rather than exploring Hamburg. (Now lots of relaxation and down time wasn't a bad thing but it just wasn't how I had envisioned our spending our German vacation time).  Room service took the place of wandering the streets in search of local dining options and steamy showers did little to take the chill out of my body.  We felt as though our hotel rooms never got warm enough but at least the down duvets that are standard issue in hotels in this part of the world mostly did their job.

So today we are heading to our next stop and will be one step closer to Belgium. People have warned us that Belgium is cool and damp year around but never cold. I hope that is true since this New England girl has lost her thick blood.
Posted by Zosia at 08:00