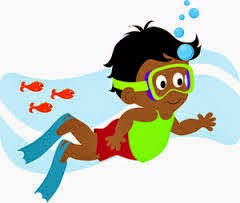 One of my biggest disappointments in my adult life is my inability to swim. Yes, I can't swim. It isn't from a lack of desire or trying, however. When I was six or seven I had an unfortunate incident involving a capsized canoe in a lake. It terrified me. A few years later my great aunt, a buxom former WAVE who had taught generations of cousins, nieces, and nephews to swim tried to do the same with me. I remember clutching her fleshy arms as I floated on my back in the middle of her apartment complex swimming pool. While everyone else around me happily splashed and floated, I sank to the bottom the minute she let me go. The same thing happened a couple of years later at summer camp. I figured that since everyone else around me could float and swim so could I. So I gave it a go in the muddy river swimming hole only to sink to the mucky bottom and have to be rescued by the lifeguard. That put an end to my water adventures for awhile.

Fast forward to college and I found myself in my final semester and still needing to fulfill the six credit physical education requirement mandated by my school. Cobbling together a schedule that worked for me I found myself staring at a "swimming for the non-swimmer" class that fit into my schedule. I thought about it since I really did want to learn how to swim. Not only was it a safety issue but everyone seemed to really enjoy it. The clincher was a dear friend who also didn't know how to swim so together we signed up for the class. Twice a week we trudged across campus, donned our swim caps and set about learning how to be safe in the water. I kid you not but we spent two weeks learning to blow bubbles in the water before actually floating. By the end of the semester I could sort of float, could doggy paddle a few feet and convinced myself that if I needed to I could probably save myself from drowning.

When Sidney was born I was determined that he would learn to swim but it wasn't until we moved to Belgium that the opportunity for lessons arose. In the weeks leading up to the start of his class he was excited. He talked non-stop about going to class, learning to swim, and getting to wear his "snazzy" new swim goggles. On the day of class he eagerly ran into the locker room, changed into his swim suit and then sat anxiously on the pool deck waiting for his class to begin. And once it began, it began quickly. We had talked about the need to listen to the instruction and do exactly what he asked and that is what Sidney did. First all of the four year olds sat on the side of the pool and kicked then two minutes later they were handed a swim noodle and told to jump right in. (Mind you, the water was four feet deep here). There wasn't any blowing bubbles in this class; it was literally sink or swim. Sidney dutifully did as he was told but looked scared and frankly pissed in doing so. He kicked, floated on both his front and back and slid down the slide into the pool along with most of his class. A few kids flat out refused to get in the water but Sidney kept it up, shivering and wiping away a few stray tears as he did so. He comforted one crying little girl and stood by her side while they waited to take a second turn down the slide. As a non-swimmer and a mom, I as so proud of my little boy. Sidney lasted the entire half hour class after which he informed me that it was scary and he wasn't doing it again. No tears, no negotiations, just a flat out statement.

The next day, with Sidney in agreement, we visited the library where we checked out a book on learning to swim. That evening Sidney dutifully studied it, asking questions about floating, different strokes, and the physics behind it all. When we suggested that he try another swim lesson he adamantly continued to refuse to do so. By the time the next lesson rolled around we had convinced Sidney that he would at least change into his swimsuit and sit by the side of the pool watching he classmates swim. Glenn even got out of work early to join us and lend some moral support. Sidney sat there decked out in swimsuit and googles, along with another little girl, as a noticeably smaller class floated and kicked their way around the water. Sidney talked about how the kids were floating, pointed out the bigger kids on the other side of the pool who were swimming and reiterated that when he was a "big guy" he too would swim. But he refused to even dip his toe into the water. Neither his father nor the instructor could entice him to get near the edge of the pool.

The same thing happened this past week, which was week three of his ten week classes. Sidney was noticeably more animated this past week and earlier in the day had even talked about wanting to go to class but just to watch. I'm not going to force him into the water but I am insisting that we go to class each week, change into a swimsuit, and watch. (I didn't fight for a slot in this class for nothing). We will sign up for classes next fall and sit by the sides again if need be. I know my little boy; he will get into the water when he is ready but forcing him to do it now won't serve any positive purpose. Eventually he will learn to swim. Heck, I might even learn myself. Stranger things have been known to happen.