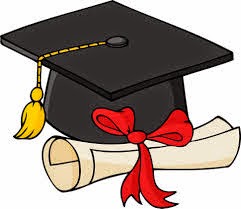 Graduation season is upon us and with it comes the long string of commencement speeches. Speakers are often high profile; politicians, actors or activists; all bringing with them inspiring messages encouraging graduates to go out and take on the world. Although I have no memory of what was actually said, I remember my college speaker being the late Ann Richards,  the former Texas governor who lost her reelection bid to George W. Bush. I'm sure her words were powerful but in all honesty, after the ceremony was over I doubt I gave them another thought.

Speakers are selected in a variety of ways; perhaps through a democratic process by the student body, faculty, or administration but most often based upon their individual achievements and success in their chosen field. As leaders in their fields in the past they may have made controversial statements or issued directives or have political leanings that some people don't necessarily agree with. But strong and inspiring leaders are just that; they are leaders who make hard decisions that move us forward, for better or for worse, as they deem best. If the intent of a commencement address is to inspire and urge young adults to take risks and be strong leaders, you want such strong and outspoken people giving the speech. Or so you would think......

The most popular commencement speakers are often in high demand, requiring them to be selected months, if not years in advance of the actual graduate date. But in the past few weeks I've been hearing about speakers bowing out due to student protests or invitations to speak being rescinded at the last minute by colleges and universities because the student body no longer wants to support or hear the message. First there was a rescinded invitation from Brandeis University for human rights activist Ayaan Hirsi Ali to receive an honorary degree after she made anti-Islamic statements. Then there was former Secretary of State Condoleezza Rice's withdrawal from speaking at Rutgers University's graduation after faculty and students protested her role in implementing George Bush's foreign policy. And perhaps most surprisingly (to me) of all was the withdrawal of International Monetary Fund (IMF) Chief Christine Lagarde from speaking at the Smith College commencement after students criticized IMF policies for furthering "imperialist and patriarchal systems that oppress and abuse women worldwide." But the controversy around commencement speakers isn't new. Last year invitations were rescinded for speaking out against gay rights (Ben Carson, Johns Hopkins University) and for supporting them (John Corvino, Providence College). And again, the policies of the Bush administration caused another speaker (Robert Zoellick, Swarthmore College) to not speak.

By protesting Rice's appearance Rutgers students are missing out on an opportunity to hear a powerful female leader share her words of wisdom. The same holds true for Lagarde and every other speaker whose engagement was cancelled. These protests only represent a single point of view. One needs to ask why the speaker was invited in the first place. Surely there are members of the student body who agree with some or all of the controversial policies. Where is their right to hear what these speakers were going to say? But more importantly, in focusing on the politics and policies Rice, Lagarde and other implemented or supported rather than the knowledge, experience, and insight these speakers would have shared, graduates are missing out on one of life's biggest lessons: whether we like it or not, we are living and working in a diverse environment. And that means hearing viewpoints we might not necessarily agree with and thinking about how these different views have shaped the world we live in. Colleges and universities are often considered to be bubbles from the outside world. But the rest of the world isn't as sheltered and neatly packaged. So on the eve of entering that big bad world, what message is being sent by sheltering these young adults from hearing a viewpoint they might disagree with? If nothing else, that varying opinion could fire up a new generation to take on the world.
Posted by Zosia at 09:30