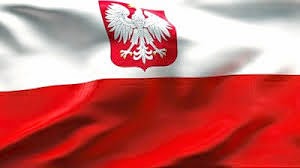 I'm half Polish but it wasn't until this past year that I really began to embrace my heritage.  My desire to get to know and better understand my lineage came about during the lead up to a wonderful week I spent in Poland. The trip was everything I had hoped it would be but rather than leaving me satisfied, it left me craving more. I wanted to see more of the beautiful country, enjoy more of the country's cuisine, and learn more about her history. But alas, life has a way of keeping me busy and I haven't had a chance to return and explore more of the motherland. Yet, that is. I know I will return at some point but in the meantime, I'm taking advantage of the next best thing.

One of the wonderful things about our current posting in Belgium is the diverse international community that we are now a part of. With twenty-eight NATO countries and a handful of other partners being represented in our little community, there is always a cultural event taking place. We attend the ones we can and make note of the others for planning next year's activities. And much to my delight, the most recent cultural event we attended was the celebration of Poland's constitution.

Poland's constitution was adopted on May 3, 1791 making it it oldest democratic constitution in Europe and only second in the world to the United States. But just because Poland had a constitution didn't mean it was smooth going for the country. If anything, over the course of the next two centuries her politics proved to be anything but easy. The country and her people endured uprisings, occupations, the reign of Nazi terror, and decades of Communism rule before the revolution of 1989 finally brought about democracy. But through it all Poles persevered. It is no wonder that the country takes such pride in their heritage and that pride was on display last night.

Although Polish Constitution Day is actually on the 3rd of May, on SHAPE it was celebrated last night. And to celebrate, we attended an impressive concert and cultural performance by the Representative Artistic Ensemble of the Polish Army that incorporated music, dancing, and a history lesson with contemporary Polish music. Singers and dancers moved us along the path of Poland's history from the adoption of the constitution through the turbulent years of World War Two. Although I didn't understand most of the words (they were in Polish after all), the meaning and emotions were clear. Because Sidney often has ants in his pants and can't sit still, this was the first sit down concert we brought him to. Sure he wiggled around a bit but he also tapped his fingers and toes to the beat of the music and oohed and ahed at the brightly colored costumes. As he said, the pretty lady was wearing a red dress and the singers (a.k.a. soldiers) had swords.  What more does a four year old boy need?

And his Mamma? More than ever, she just wants a return visit to Poland. Soon......