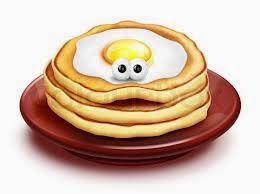 Typical of most children, my son gives me mono-syllable answers when it comes to what he did at school each day. When I ask specific questions I may or may not get responses and when he does choose to answer, many times I'm not quite sure what he is talking about. And because the school is a French immersion one, where his teacher speaks a limited amount of English, I am left grappling to figure out what actually goes on during the day. Granted, important notices, such as the chicken pox alert that came out on his second day there, are translated into (poor) English but the majority of the information is only in French. I may have taken a few years of French way back when in high school but most of the language has now faded to a distant memory meaning I find myself relying on Google Translate to decipher a lot of what goes on during Sidney's day.

Lunch is a prime example of this. We were presented with a monthly lunch menu on Sidney's first day but much to my chagrin it was written solely in French. At a quick glance I could see that each meal was balanced with fruits, vegetables, starches, and meats but that was about it. Sidney was very little help simply stating, upon persistent inquiry, that he didn't eat because he didn't like what was set before him. When I would ask him what it was, with the exception of pasta, he simply says he doesn't know. I have repeatedly encouraged him to at least try a bite of everything because he might discover something he likes. I didn't think my suggestion sunk in but I hoped it had none the less.

But last Friday, during his daily after school drilling about lunch Sidney had a different response. He said that he had eaten lunch because he liked it. But he couldn't tell me what it was because "it was too difficult to explain". I was intrigued. Intrigued enough to go to the computer and plug his lunch menu into Google Translate. And let me tell you, my son isn't eating the typical cafeteria lunches I had as a child. (Some of the more memorable, and not in a good way, meals included a platter of baked beans served with a petrified cube of yellow cheese and the ubiquitous "tuna-pea-wiggle", essentially a bad tuna casserole served over saltine crackers).

So what did Sidney eat for lunch on Friday? He started off with a watercress soup and continued with a chicken sausage served alongside a dish of zucchini au gratin. These international pre-schoolers are eating well. Out of curiosity I went on to translate the remainder of the lunch calendar and each meal was more impressive than the last. Every lunch started with a soup; cream of carrot, tomato & basil, and celery and watercress seemed to be favorites. Entrees ranged from fish fillets with mustard sauce and lasagna Bolognese to pork fillets with a mushroom sauce and macaroni and Swiss cheese with ham.  No boxed orange stuff served here. A few items didn't translate but the "flight of wild mushrooms" sounded really interesting. And of course no meal would be complete without dessert. Where are the jello cups, canned mixed fruit, and chocolate pudding?  In their place are fresh fruits (kiwis have become Sidney's new favorite) and mocha creme, vanilla and caramel flan, or crepes with sugar. For four year olds? I love it!

Despite my best attempts at broadening Sidney's culinary horizons--I make versions of many of these dishes at home--he steadfastly refuses to try anything that is new, different, or anything that is not plain pasta. I am hopeful that his being repeatedly presented with these meals, combined with mid day hunger pains, will finally induce him to try new dishes. If the school keeps serving these meals the other children must be eating and enjoying the food so maybe my little American-Albanian boy will grow to like them too. Honestly, as a food loving home cook I am in awe at these menus. American schools could take a pointer or two from their European counterparts.
Posted by Zosia at 09:00