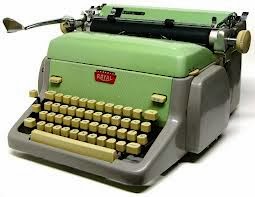 So do you place two spaces or just one between your sentences when you are typing? Until recently I used two. Why? Because that is the way I had been taught so long ago in high school typing class. I never questioned the logic behind this but rather accepted it as the "rule". But somewhere over time the rules seemed to have changed, or reverted back to the way they were originally meant to be, and as such, these changes were recently brought to my attention. In the big scheme of things this might seem like a trivial issue to most people but for writing professionals and punctuation perfectionists, this is a pressing issue.

An article posted on Slate discusses the history of the use of space. Although I found the author's tone highly condescending against those of us who tap out two spaces, once I read through his opening pompous statements I found myself nodding and agreeing with his overall argument. According to this article, and several other sources cited by the author, hundreds of years ago typographers originally laid out their sentences without a set number of spaces; some used single spacing while others used double. By the early twentieth century, Europeans followed by Americans, settled on a single space rule but that didn't last for long. Apparently it was the manual typewriter that created the shift from "proper" single spaces at the conclusion of a sentence to two. (I learned to type on a clunky electric version but was taught the two space technique). Because the font of a manual typewriter was monospaced type, two spaces inserted between sentences made the text easier on the eyes. But then along came the personal computer with a bevy of proportional fonts making the argument for two spaces obsolete. But somehow this message never got widely sent. In fact, even amongst people who knew of the new rule, many persisted with inserting two spaces because that is what they had been taught and that is what they were comfortable doing.

So does it really matter? Some people do think so and their arguments for the single space are quite amusing. Perhaps my favorite section of the above mentioned Slate article is as follows:


Forget about tolerating differences of opinion: typographically speaking,
typing two spaces before the start of a new sentence is absolutely,
unequivocally wrong," Ilene Strizver, who runs a typographic consulting
firm The Typo Studio once wrote. "When I see two spaces I shake my
head and go, Aye, aye, aye," she told me. "I talk about 'type crimes' and
in terms of what you can do wrong, this one deserves life imprisonment.
It's a pure sign of amateur typography." "A space signals a pause," says
David Jury, the author of About Face: Reviving The Rules of Typography.
"If you get a really big pause--a big hole--in the middle of a line, the reader
pauses. And you don't want people to pause all the time. You want the
text to flow.

After reading this article I found myself scouring the internet counting the spaces between sentences in the articles I read. It wasn't something I would have picked up on had I not been looking for it but the majority of the items I read, posted on the websites of everything from well respected news outlets to commercial enterprises and personal blogs had two spaces between their sentences. In my (novice) opinion, it didn't look bad until I did a side-by-side comparison with a single space article. Much to my surprise, the difference was noticeable. Did I find myself pausing for longer between sentences with more spaces? I'm not sure but the way the words were spread out over the page did look different. Who knew? I liked the way it looked.

So, in my quest to be less of an "amateur" I'm now placing just one space between my sentences. Or at least I am trying to. After all, old habits die hard but I'm working on developing a new, one space habit. How many do you use?
Posted by Zosia at 09:00