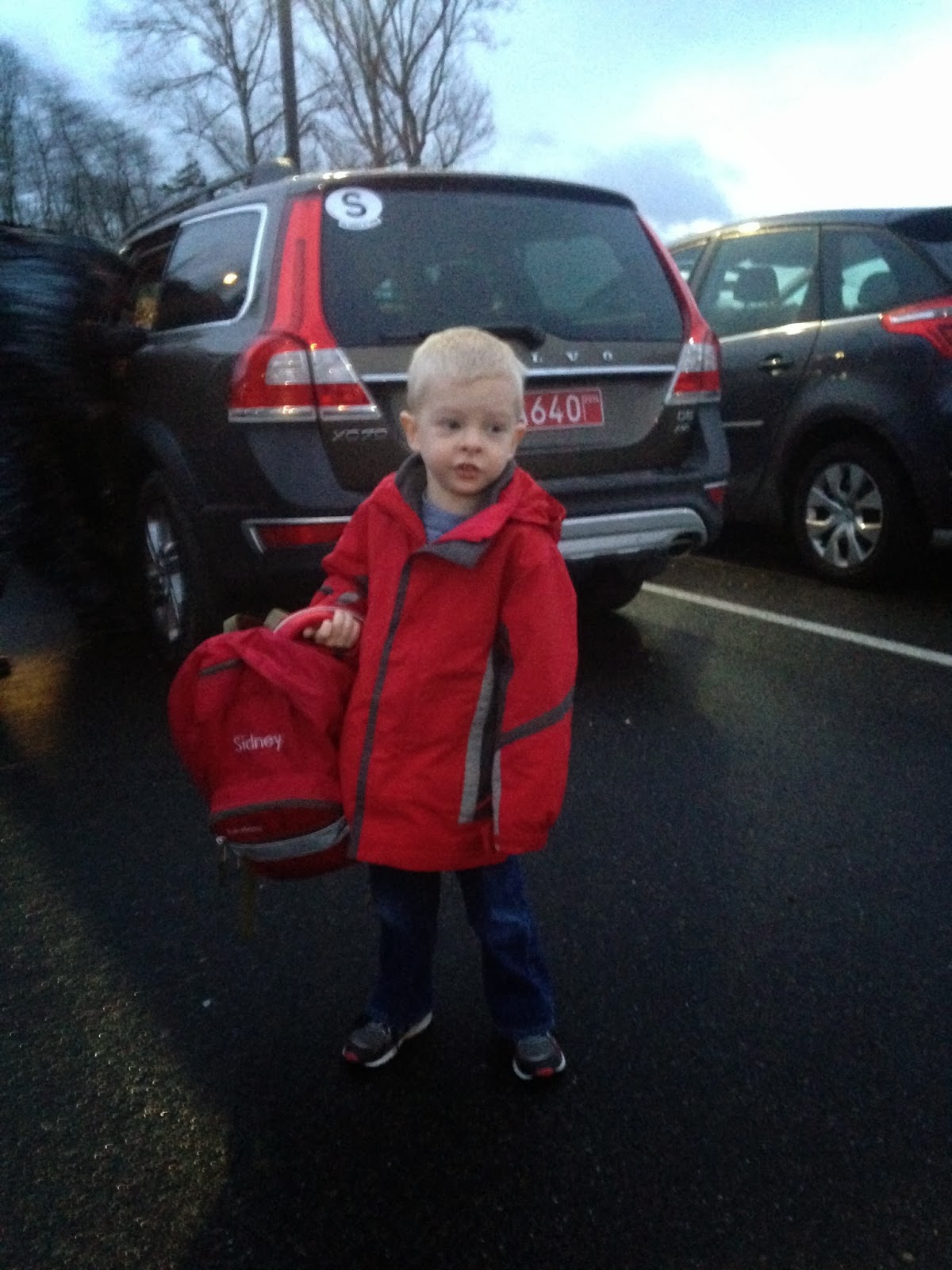 Last week my little boy started school for the first time. I'll be honest; up until the moment when we dropped him off I wasn't sure how it was going to go. But in the end, Sidney was a rock star! At a little over four years old I know he is late by today's standards for starting pre-school but prior to arriving here in Belgium, I felt as though our options were limited. Yes there were pre-schools in Albania where other Americans sent their children but I felt as though the costs and benefits just weren't worth it. So we held off knowing that we would soon be heading to Belgium with the plan to enroll him in the Belgian operated French immersion pre-school, or kindergarten, at S.H.A.P.E. And that is just what we did.

Sidney was apprehensive about starting school. In all of our conversations leading up to his starting he expressed excitement at the idea of having new friends, trying new activities, and even learning French. We talked about how his school would be next door to daddy's job and Sidney's new job would be to go to school each day. He would nod with understanding but then he would turn around and say he wanted to move back to Albania and stay home with me all day. We gently told him that neither were possible options and he would nod sadly but soon we would start the whole conversation cycle over again. Needless to say, I wasn't sure how things were going to go.

The day we visited the school to enroll Sidney he went willingly and even enjoyed playing with a few new toys. The highlight of the trip was drinking out of the tot sized water fountain but once we left the campus Sidney informed us that he wasn't going to school the next morning. But the next morning he was awake before us and readily picked out his clothes for the day. He even helped pack up his new backpack and eagerly walked to the car. During the ride to school he was silent but as we pulled into the parking lot he again reaffirmed his decision that he would not be going to school. When we told him that he had to go I expected tears but at that moment, none were shed. Instead he silently held our hands as we walked to his classroom at met Madame Isabelle, his Chanel wearing, French speaking teacher. Looking between Madame Isabelle and us, Sidney asked if we were staying with him. When I told him no, but assured him that we would be back to pick him up, his big blue eyes welled with tears. Assuring us that Sidney would be OK and shooing us out of the classroom, Madame Isabelle scooped Sidney up and Glenn and I slunk out of the school to the sound of Sidney's plentiful wails for "Mamma."

Wednesday are a half day at the Belgian kindergarten so when Glenn and I returned a few hours later relieved that we hadn't received a phone call requesting us to pick Sidney up early. Because we found ourselves a few minutes early, we sat in the parking lot and watched Sidney's class play on the playground. There was our little red coated son playing alongside his classmates then clasping hands with one boy and walking back into the school alongside his class. It was at that moment that we both exhaled in a collective sigh of relief that things were working out. Madame Isabelle's only comment to us was that Sidney had lots of energy. Smelling like Madame Isabelle's perfume, Sidney's comment was that he "cried for a long time for Mamma" but upon further questioning he started talking about playing with Legos and jumping on the playground. When we asked if he liked school he said yes but then proceeded to inform us that he wasn't going back. These statements were repeated throughout the evening but overall we thought the day went well.

Thursday morning Sidney once again informed us that he wasn't going to school but quickly got dressed, ate breakfast and got in the car. At the school he repeated that he wasn't going but dutifully walked to his classroom. Once he was greeted by Madame Isabelle he quickly spotted a new toy and busied himself with discovering its ins and outs and ignored us. Yes, our little boy dismissed us by turning his back to us so we left, both relieved that we had escaped another round of tears and a bit hurt at being dismissed. Pick up that afternoon was much like the day before but since Sidney had been there all day we got an earful of even more activities. Sidney assured us that he had fun and liked school but once again informed us that he didn't want to go back. Friday was more of the same only at drop off he quickly gave me a kiss, Glenn a hug then ran to the waiting arms of Madame Isabelle. He even responded to her French greetings and didn't notice when we left the room.

So yes, I do believe my little boy is liking school. In the evenings, smelling of perfume, he is talking eagerly about what he did and saw during the day. He is talking about playing, sharing, and making friends; it makes a Mamma's heart swell to hear his happy chatter. He says he likes Madame Isabelle. I can only hope that his love of school continues. And someday, when he brings home a girl reeking of Chanel I'll know that these early school days were quite memorable.
Posted by Zosia at 08:30