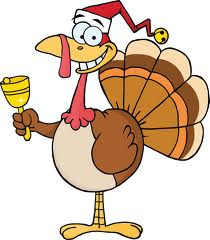 Christmas has arrived early to household Brown at a time when I have yet to even begin cooking for tomorrow's sit down Thanksgiving dinner for sixteen. Yesterday, two days before Thanksgiving (which in itself is very early this year), I hauled out my Christmas decorations for an interview and photo shoot about traditional American Christmas foods and decorations.  Living Magazine (an Albanian publication not to be confused with Martha Stewart Living) is writing an article profiling ex-pats in Albania on their Christmas traditions.  By sheer luck little old me is representing America in this article.

When I was first approached to do this I immediately began wondering what a traditional American Christmas looks like. After all, America is a very diverse country where a large percentage of its citizens don't even celebrate the holiday.  Is traditional American reminiscent of a Norman Rockwell scene?  Are palm tree Christmas trees and hula dancing Santa Clauses considered to be traditional (they are after all, uniquely American)?  Since the focus of the article was to be traditional foods I queried my foodie friends.  Their suggestions were as varied as the people themselves but left me no closer to an answer.  Growing up in a Polish-American household where our Christmas Eve celebration was a traditional Polish Wigilia followed by an American style dinner the next day my options were diverse.  Given my limited food resources here in Albania and the fact I haven't cooked a traditional Polish dish in years, I opted for what I know best:  pies.  After all, what is more American than pie?

I dipped into my sacred stash of pureed pumpkin and make a pumpkin pie and a maple-walnut pie.  The former is such a traditional holiday dessert and the later was a unique dish in my own family since we lived in New England (the maple influence) and my mother was not a fan of pecans (the traditional American nut).  The night before the interview I made two "practice" pies and staged the ingredients. After all, no one wants to see me running back and forth between the kitchen and the pantry as I try to put together a dish.  I also dug out some of my most cherished Christmas decorations and all of our family's (including the dog) stockings to share with the the reporter.

I was a bit nervous when the reporter and his photographer arrived.  Not only do I not like to have my picture taken but I also dislike anyone being in the kitchen with me when I cook.  Fortunately, the reporter immediately put me at ease and it turned out that there was very little actual cooking involved.  (Thank goodness I had actually taken the time to make pies ahead of time).  Instead we spent close to two hours talking about my family's Christmas food and decorating traditions.  We started in the kitchen when I mimed preparing then eating the pies while talking about the ingredients and why these foods are traditional to me.  If it wasn't for the occasional flash of the camera and cued instructions I would have forgotten that the photographer was even there as I reminisced about the foods I grew up on.  When we moved onto the decorations and the stories behind each ornament I became even more sentimental.  Sharing the story behind my angel ornament, the significance of a hand crocheted snowflake, and what the U.S. Navy nutcracker signified reminded me why these holiday seasons are so important to me.

In one respect the two hours flew by. At the same time I was exhausted when it was over.  With my pearls, matching twin set, Williams-Sonoma kitchen gadgets and disturbingly coordinated holiday decorations, I suspect the results are an Albanian combination of Town & Country meets Better Homes and Gardens with a little Martha Stewart thrown in for good measure.  We will see how this all turns out when the December issue of the magazine hits newsstands next month.  Of course since the magazine is only published in Albanian and (thankfully) the interview was in English, I wonder how my thoughts will get translated.  In the meantime, we have plenty of  pies to eat and while missing my stateside family, I am already in the Christmas spirit.
Posted by Zosia at 15:37