The American people.  Or at least at the moment we are the winners.  Regardless of how we may personally feel about the outcome of yesterday's election, we must celebrate the democratic process.  Because as a free and democratic country political candidates from every demographic of American society can step forward with pledges to represent the interests of the people.  These said people in turn do their homework on the candidates' platforms then cast their votes for the candidate whose pledges best match their personal ideals.  The process if far from perfect- unfortunately issues of race, religion, and socio-economic status get thrown into the debate--causing us to lose sight of so many of the real issues.  At times it gets down right ugly--how many attack ads (in both directions) can we actually watch?   However, throughout it all, this is what democracy is all about.  The  freedom to vote is a right that many Americans take for granted.  It is the desire for this very freedom and democratic ideals that causes citizens of countries around the world to take to the streets to challenge their own governments.

Over the past few months I've watched with simultaneous interest, astonishment, and at times disgust as my Facebook friends have posted various political commentaries as a part of their regular status updates.  I've found some of the postings to be predictable while others have taken me by complete surprise.  The wonderful thing through this entire process is that I've realized the great diversity I have amongst my friends.  Who knew?   For every friend who posted in support of gay marriage, universal health care, and a woman's right to control her own body I have read counter posts that support the repeal of "Obama-care",  the preservation of  traditional marriage, and the reforming of our current Medicare and welfare systems.

Do I agree with everything that is posted?  Absolutely not.  Some of the more thoughtful postings, however, have challenged me to really think about what and why I believe what I do.  While we agree on many issues, in the split-party Brown household, such postings have resulted in some lively conversations.  Glenn and I have debated whether health care is a right or a privilege and how the United States government should handle the on-going immigration debate.  In the end we've mostly agreed to disagree on these divisive issues but we've both learned a bit along the way. (People who know both of us might be surprised on which side of the line our individual opinions lie).

Because the American people have spoken, collectively as a country we now need to agree to disagree and work towards our shared goal of wanting what is best for the country.  If we don't agree with the outcome of the election we will have another chance in four years to change things.  Regardless of which side of the aisle we sit on, whether we are red, blue, or purple, what is important is that we move forward as a cohesive force and tackle the numerous problems and obstacles that await us.  As Mitt Romney said in his concession speech:

The nation, as you know, is at a critical point.  At a time like this, we can't
risk partisan bickering and political posturing. Our leaders have to reach
across the aisle to do the people's work. And we citizens also have to rise
to the occasion.

If we can do this, we will all be winners.  If we can't, then we all lose. 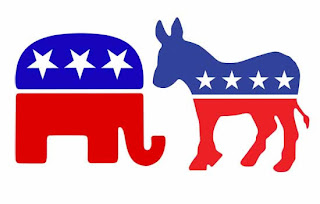