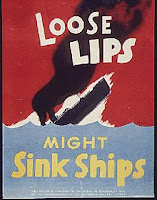 In the Navy they say that "loose lips sink ships."  Developed as a World War II propaganda campaign, this slogan warned Americans of the national security dangers of talking too freely.  This phrase has been repeated throughout popular culture in oft referenced humorous ways but the phrase remains a reality to families from all branches of the military.  Modern day lingo now refers to this as OPSEC (Operational Security) and military commands take these warning seriously.  As a military spouse I quickly learned to not ask questions or talk about ship and troop movements, impending port calls, and who is going to be where at what time.  This didn't mean I didn't want to know; yes I was often curious but the reality was that I didn't have a legitimate reason to know the details.  (Because my husband was involved did not create a legitimate need to know).  Information made public by a command's public affairs office was often intentionally vague and more often than not, issued after the fact.  This is all purposefully done to keep our soldiers, sailors, and our nation safe.

During Glenn's last deployment we developed codes of a sort for communicating with each other.  When I met the ship in Dubai for Christmas the planning both via scratchy phone calls and email were vague in detail.  We figured it out though and made it work.  It was during this last deployment that Facebook burst onto the scene for those of us who weren't twenty-something college students.  OPSEC rules seemed to fly out the window as spouses, girlfriends, parents, and even sailors themselves posted information on their unrestricted pages about ship location and movement.  I kept coming across a particularly irritating and disturbing breach of information in one navy spouse chat group where a woman had a count down clock marking the time until she "met John in Dubai for a vacation".  Combine that with postings about the name of her husband's ship (not the same one Glenn was on), her husband's job and her travel plans and this could translate into a terrorist's dream.

The loose lips concept transcends the military and into the civilian world as well.  I've long grown accustomed to not asking Glenn specific questions about his work. If he wants to share details he will.  If he can't or doesn't want to it saves him from being in the uncomfortable position of having to tell me he can't tell me.  I'm continually amazed by the number of people- experienced military officers, their spouses, and others with experience working around sensitive information- who insist on probing for answers that they really have no business knowing.   Being a spouse, child, or parent of someone does not necessitate the need to know names, dates, places, and the like.  A simple "because I said so" or "because I can't talk about it" from the person being questioned should suffice.

I'm equally alarmed by the number of people who work in these sensitive positions who repeat work related issues to their spouses and family members.  I've lost track of the number of times where I've heard what I would deem sensitive information from other spouses who have no legitimate reason for being aware of such information.  What might be interpreted as pillow talk or playground chatter can in reality translate into so much more.  This is scary business folks.  For the sake of our own safety, those of the ones we love, and of our country I urge everyone to rethink their legitimate need to know information.   Its not being rude or dismissive; its practicing good OPSEC.
Posted by Zosia at 11:40