A World Full of Specialness 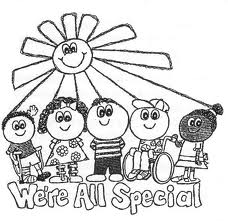 If the current popular perception is to be believed, we are all winners.  From youth sports teams moving away from keeping score and high schools that either don't have class valedictorians or have multiple ones so no one is perceived to be inferior to the next person to work places where all employees are rated as outstanding on their annual performance reviews, we are apparently all growing more exceptional in every way.  While we readily acknowledge that we all have strengths- whether they are academic, athletic, or artistic, there is a trend underfoot towards doing away with the notion that we have any weaknesses.  We are all perfect.  In every way.  No one is better than the next person. We are all equal.  A part of me jests but I fear this isn't that far from the reality.  And why is this happening?  Have strong self-esteems and healthy egos is one thing; having an inflated sense of self and no sense of humility is another.  Where does one cross the line from one side to the other?  And what happens when as a society, we are all on a single side?

Who doesn't remember the Wellesley (Massachusetts) high school Principal who gave a speech to a graduating class and happened to mention that they all weren't special?  We may not remember the rest of what he said but those few words went viral last spring as people across the country expressed outrage at the Principal's audacity to speak the truth.  How dare anyone insinuate to a generation of teens, who had been raised to believe that they were indeed exceptional in every way, that they weren't?  Having witnessed first hand this growing sense of entitlement and superiority amongst younger generations (yes, I do sound old now),  I personally applauded this speech and am still thinking about it.  Contrary to popular belief, not being exceptional doesn't devalue you as a person; rather it recognizes the fact that some of us are better at some things than others and there shouldn't be any shame in this.

I was raised to believe that life isn't always easy and you have to work hard to achieve success.   But if you do work hard, chances are that you will succeed.  My parents praised me when I earned it--good report cards, winning a music competition,  or offering a kind gesture to someone who needed it earned their positive accolades--- but they also let me know when I could have or should have done better.  A poor grade was no one's fault but my own (and it certainly was never the fault of the teacher) and perhaps if I had practiced more I would have placed first rather than second in that music competition.  Over time this ethic was instilled in me and I learned that if I wanted to be number one, successful, or whatever label the recognition is called---in whatever the situation may be-- it wouldn't come automatically and I would have to work for it.  Yes, there were many times I was disappointed in not winning, when I was picked last for a team, or I didn't receive the job offer I had really wanted, but this made me try harder the next time around.

I don't believe this idea of having to work for something is unique.  There is something to be said for the evolutionary belief of survival of the fittest; since prehistoric times if you wanted to survive, or get ahead you needed to work for it. If you wanted to eat you had to be a good hunter, or at least provide something to the clan in exchange for earning your keep.  These notions aren't completed obsolete.  The U.S. Navy continues to use a stratification system for rating sailors and officers within a command.  Only one person within a given command, squadron, etc can be ranked number one.  Someone else is number two, then three, and so forth.  Since promotions are directly connected to how you are rated, there is an incentive to work hard to be number one.  Few work places seem to practice such measures though. Unfortunately, I've worked in too many places where this rating system is eschewed.  In one of such workplaces people were rated on a scale of 1 (needs improvement) to 5 (exceptional), and the expectation was that as a supervisor, unless you had strong evidence to the contrary all of your employees would receive exceptional ratings.  Seriously!  What does it mean if everyone is rated as exceptional?  Does that mean that everyone is really average?  What do you strive for if you are told you are doing everything perfectly?

So what happens when you have a generation (or more) of people who have never been viewed as anything less than exceptional?  Maybe a few people really are that all around good but as one of the non-exceptional mere mortals out there, I'm feeling left behind.
Posted by Zosia at 14:46

Email ThisBlogThis!Share to TwitterShare to FacebookShare to Pinterest
Labels: parenting, responsibility, self esteem