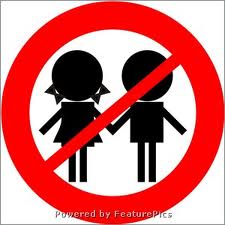 We've all heard the debate.  And I'm sure we've all heard the children as well.   Nothing seems to fire people up more than the question of children in public.  One side accuses the other of being "anti-child" while the other lashes back saying that poor parenting creates children who run amok.  Throughout the debate the underlying question remains:  when and where is it appropriate to bring children and will we even be able to all agree?  Where you stand on this issue depends on where you are coming from.  Personally, I know my own position on this question has changed since I became a parent. Prior to entering the parenthood club, it wasn't so much that I didn't think children belonged in certain situations; rather in most cases I just didn't want to have to deal with them.  Now, from the perspective of a parent, my thinking has changed (somewhat).

Restaurants and airplanes are two of the most common hot button locations where the debate is particularly polarized.  (Of course I've witnessed my share of unruly and disruptive adults in both venues but that is a topic for another blog entry).  The restaurant question is regularly posed and discussed with Tom Sietsema, The Washington Post's food critic.  Should children be allowed to eat in nicer restaurants?  Is it acceptable to bring children out to a nice restaurant for lunch but not dinner?  Or should families with children be relegated to fast food and informal dining chains? Airplane travel is another constant debate.  National Geographic's Christopher Elliot moderates these debates in his column where the question of children seems to be the most prominent travel related question.  People argue about whether airplanes should have designated child-free zones, family areas, or should children be banned from certain flights all together.   I've received my own fair share of dirty looks from fellow passengers when they see me boarding an airplane with a small child in tow but I understand where they are coming from.  Who hasn't spent a long fight with little feet kicking the back of their seat with the offender's parents sitting there oblivious to what is happening? We've all heard the screaming child as well.  Most times the crying can't be helped but that doesn't make the situation any more tolerable.  Ironically, now that I am a parent, other people's crying children don't bother me. I can usually tune out the noise and sit there feeling grateful that I am not responsible for the source of the disruption.

The children - no children debate is also deeply cultural.  In the Balkans, children are welcomed at most places and events.  From my western perspective this isn't always appropriate but clearly I am in the minority with that opinion here in Albania.  We've attended formal receptions where children have been running under foot and have spent more than one late night dinner in a restaurant surrounded by baby strollers and unsupervised toddlers.  When we host events in our home some of our guests will ask if it is acceptable to bring their children while others will just arrive on our doorstep with them.  At the same time, we've been accosted by more than one dinner host when we arrive without Sidney in tow.   If you have a crying or fussy baby on a plane full of Albanians, rather than give you dirty looks they will all jump up and offer to help soothe the fussing child.  I do love the fact that many European airlines greet all of their little passengers with entertainment packs and special snacks.  Now that is customer service that we all benefit from.

So how do we deal with the child- no child issue?  Clearly, all children are not created equal with some being better behaved than others.  I would say that sometimes Sidney is very good and other times...... not so much.  I love Sidney and enjoy being with him but recognize that there are some situations where his presence just isn't appropriate.  If the situation is particularly formal or the hour overly late, Sidney stays home.  On the occasions when we do bring Sidney out to eat in nicer restaurants we are careful to make sure his presence doesn't disturb others. We will opt for earlier dining times and if his mood turns sour causing him to become disruptive, we remove him from the situation immediately.  (Having a ready stash of "table toys" and other forms of entertainment always makes things easier as well).  As far as travel goes, we are fortunate that he loves airplanes so has yet to be overly disruptive on one of our many flights.  Of course it helps that his little legs are still too short to kick at seat backs and he is easily amused by his father's explanations, complete with toy airplane demonstrations, of the physics of flying (I kid you not).  Still, I spend most flights on edge worried that he will have a meltdown and given the close confines of a plane, we wouldn't be able to remove him from the situation.  Would I support a family and children zone on an airplane? Absolutely since it would ease my worry about bothering others. Do I still plan on taking Sidney out to dinner?  Yes again, but we will continue to select venues where we will all be comfortable.  In the end, it doesn't matter which side of the debate you are on. Its all about being aware of our surroundings and being respectful of others. If we practice this, we can all be happy.
Posted by Zosia at 16:56