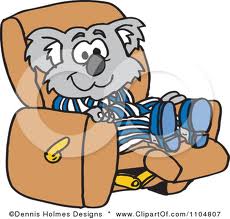 I need to learn to sit.  I'm not talking about the physical act of actually sitting down; I mastered that one decades ago. What I need to do is learn to just sit back, relax, and do nothing.  No reading, crafting, watching television, or playing with my laptop.  Last night I realized just how bad I am about sitting when I commented to Glenn that Sidney never curls up in my lap to read a book the way he does with his dad.  Glenn pointed out that I am never just sitting there; rather I always have something in my lap or my hands to keep me busy. I thought about it for a brief moment, looked down at the laptop that was perched on my knees at the moment, and realized just how right he actually was.

I think I've always been this way.  I don't remember a time when I haven't had something in my hands while sitting in a chair.  I'm the person who, even in my pre-child days carried a large purse that was filled with "entertainment".  I always bring a book in my purse to doctor appointments in case I need to wait.  (I also have a pen and a small notepad in case I need to write anything down).  Living inside the DC beltway taught me to always have some distraction stashed in my car since I inevitably got stuck in gridlock at least once each week.  Receiving my first e-reader was monumental since it eliminated the need to fill my suitcase with reading material when I travelled.   Even on my busiest days I may say that I need to sit down and rest but within minutes I am inevitably thumbing through a magazine or jotting down notes on a piece of paper. Glenn, on the other hand, can seem to sit in his chair for hours on end doing what appears to be nothing.  I will peer over at him to see if he is even awake and he is usually sitting there in a Zen like trance. His mind may be filled with developing ideas but physically his body is at rest.  Perhaps this is why, that after a lazy Sunday of "doing nothing" I feel exhausted while Glenn is relaxed and ready to face the week ahead.  Could it be because I have spent the afternoon pinning new recipes on Pinterest, planning menus and grocery lists for the week, wasting time on Facebook, and researching future trips?  My distractions aren't always technology driven; knitting socks is the perfect portable distraction when a Wi-Fi signal isn't available.

On a recent plane trip where I found that had mistakenly placed my Kindle into my checked luggage I found myself sitting in my seat with absolutely nothing to do.  Sidney and Glenn, along with most of the other people around me, were dozing.  I had already thumbed through the in flight magazine several times on a previous flight.  Even the potential view of the Alps below was obstructed by a heavy cloud bank.  The prospect of sitting still for a full hour with nothing to occupy me made me feel physically uncomfortable.  I just don't do well with the whole sitting thing.  I also realized that I couldn't remember the last time I had found myself in that predicament.  I have never been so relieved as I was when the plane began its descent into Tirana.

I am vowing now to be better about sitting.  As hard as it may be, I'm going to make a concerted effort to keep my lap free when Sidney is around in case he wants to join me in my chair.  I can't make any promises for when he isn't in the room, but this will be a start.  I do have another flight planned for this upcoming weekend.  This time I'm going to be sure to put not only my Kindle but a magazine or two for good measure into my carry-on bag.  After all, this sitting and doing nothing thing will still be a work in progress.
Posted by Zosia at 15:21