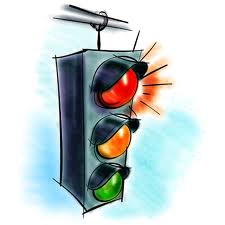 Yesterday on Facebook a friend posted her frustration with the impatience of Boston drivers and their liberal use of the car horns.  I read the comment and chuckled since I had been thinking the same thing about Albanian drivers during my own short, but anxiety laden drive between my house and the grocery store.  We had been warned about Albanian driving habits before we arrived in the country and were briefed on the dangers of driving in Albania on our very first day at the Embassy.  Some joke that driving is a contact sport in Albania. While most days I wouldn't go quite that far (although I have experienced my share of bumps and dings while driving) driving here certainly isn't for the faint of heart.

The first thing one notices about Albanian drivers is that they only use their brakes as a last resort.  Blinkers and horns are used to an excess but Albanian drivers will swerve around slower vehicles, pedestrians or stray animals rather than use their brakes to slow down.  If you are like me and are foolish enough to stop for a red light (when the lights are working) or a stop sign, cars will come barreling up behind you, swerve to either the left or right (if you are lucky) and continue right on down the road.  I've had more near misses than I can count as both a pedestrian and a driver because I've assumed that on coming vehicles will stop for the traffic signals.  And don't even get me started about driving through the numerous traffic circles that clog Albania's roadways.  Cars pummel into them at full speed crossing from left to right and back again with nary a brake light in sight.  It continually surprises me that I haven't seen more accidents.  The aforementioned bumps and dings on the other hand, are another story.

When Albanian drivers see an open space--whether it be a left turn lane and they are continuing straight or turning right or the empty space is the lane for on coming traffic, they drive in it.  I'm not just talking about the mopeds and scooters whose drivers seem to have a completely different understanding of traffic laws.  (Personally, if I was driving such a small vehicle with no helmet or protective gear I would be especially careful and observant).  Furgons, trucks, and even buses join the ranks of sedans in creating three and four lane roads out of single lane streets.  On a street such as Tirana's main boulevard which already has numerous lanes, more often than not it will become a free for all of cars speeding in all directions in all lanes.  If a car has actually stopped to turn across oncoming traffic, it is a common sight to see two, three, or more other vehicles who have driven up around or in front of the vehicle in order to make the same turn.  Or a car will pull up on the left then continue straight on through the intersection and down the road--again with no brake lights.  The most common sight on the road is a vehicle heading straight towards you in "chicken" mode honking their horn to tell you to get out of their way.  Since we've been here a few "designated" bicycle lanes have popped up throughout the city.  I don't think I've ever seen an actual bicycle in any of them; rather, the bicycle lane is an additional lane for motorized vehicles whose drivers don't feel the need to wait in the traffic jam with the rest of us.  The country's numerous driving schools must teach all drivers that if there is an open space, they need to drive in it.

Just as Albanian drivers don't slow down for traffic signals, they don't slow down or stop for police officers.  I can't imagine any other place where police and other law enforcement officials are so disrespected and flat out ignored as they are on Albanian roadways.  Never mind if emergency vehicles with their lights flashing are approaching; your typical Albanian driver will continue on through either oblivious to or uncaring of the rules of the road that the rest of the world observes.  On a daily basis cars continue to speed by the police officers who stand in road in front of the Embassy as they attempt to direct traffic.  This morning we witnessed this disrespect again first hand as a driver got into a verbal altercation with a police officer who had the gaul to call him out on the fact he had cut off the police vehicle and nearly caused an accident.  (We were directly behind this incident and in the end I can only surmise that the driver "won" since after a lot of hand gestures and yelling he eventually sped away with the police officer following at a slower speed).  I can only imagine how different this scene would have been in any other western or civilized country.

Whether you call it defensive driving or just pure carelessness, you are taking your life into your own hands every time you take to an Albanian roadway.  Glenn says driving in Albania is liberating.  In some ways it is but the fact remains that getting behind the wheel here scares the living day lights out of me.  I  still do it though.  I use my horn more liberally than I could have ever imagined I would and I have become more relaxed about dings and bumps.  I haven't gone totally native though; I still stop for all red lights and stop signs and when I encounter the neighborhood cows in the street, I come to a full stop and allow them to pass.
Posted by Zosia at 15:15