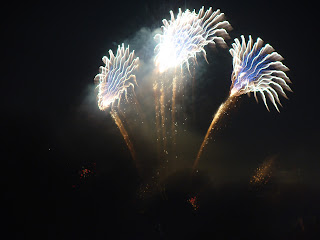 Happy New Year!  Last night Albania welcomed 2013 in with a big bang. Or in reality, a series of them.  Firecrackers of various sizes and intensities had been exploding in our neighborhood all day.  (Actually, it started this past weekend and has only been increasing since then).  As the sun set, their frequency only increased.  Neighborhood teenagers lit a bonfire at one end of our street and occasionally threw firecrackers down the street at a rival group of boys.  Every once in a while one of the guards from the neighboring Turkish Embassy would walk between the two groups but other than that the noise and explosives were allowed to go unsupervised.  (Just the thought of such activity being permitted in the United States makes me laugh.  In many suburbs, where a backfiring car warrants a call to the police, such activities would make people think they were under attack and send them running for cover).

We suspected that this year's activities would be larger and louder than those of last year.  Growing economic problems and political rhetoric has been increasing tensions throughout Albania over the past months. In many respects it feels as though people are just waiting and picking for a fight. For the first time since we moved into the house, the only cars parked on our normally vehicle clogged street were the two abandoned ones that have been deteriorating by the day as they get picked clean of parts.  One of our neighbors had moved their car off of the street and into the safety of cover under their balcony.  Another had covered their vehicle in rugs and tarps which we surmised was a protective measure against falling debris.

Sidney loves fireworks and we had promised him that if he went to bed we would wake him up in time to watch the midnight fireworks.  Yes, he was in bed by his usual bedtime but never went to sleep so at 23.00 we bundled him up and brought him out onto the balcony with us to watch the developing festivities.  At this hour the air was already heavy with the smell of sulphur and smoke and from our third floor perch we could see smaller explosions filling the night sky throughout Tirana.  On occasion we thought we heard gunfire mixed in with explosion of firecrackers and the sight of hundreds of military issued (ammunition) red tracer rounds confirmed this theory.

Shortly before midnight the neighborhood and the city turned eerily quiet.  There were neither explosions nor fireworks and even the kids on our street had disappeared.  The once roaring bonfire had dwindled to a few embers.  From the safety of our balcony we wondered what was going to happen next.  At 23.50 the city suddenly came back to life with explosions of lights, noise, and smoke.  We had a 360 degree view of the spectacle as fireworks came fast and furious from every direction.  It was a sensory overload.  With the exception of a couple of overly loud, too close to home explosions, Sidney was a trooper as he took in what can only be explained as an indescribable light show.  I fear he has now been spoiled and won't find much excitement in watching the big ball drip in Times Square.

The spectacle continued in full force for close to half an hour.  Even after we had gone back inside we could hear the sounds of errant fireworks and explosions.  Pictures can't adequately describe the experience of being in the midst of an Albanian New Year's celebration.  Here is a You-Tube clip that provides a better sense of what it is really like.  The only thing missing is the smell of the sulphuric smell of fireworks and gunpowder.

Today has dawned as a crystal clear and sunny winter day but one only needs to inhale deeply and you are reminded of last night's festivities.   We survived the ushering in of 2013 in an explosive way.  So here's to a healthy, safe, and happy rest of the year!
Posted by Zosia at 10:23