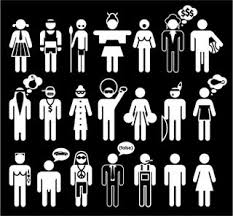 Typical:  Combining or exhibiting the essential characteristics of a group; conforming to a type. ***  But what does this really mean?  I know what is considered typical for me--my daily routine, the way I dress, my thoughts, what I eat-- but I seriously doubt that they are the same for the next person.  Typical may be easy to define for an individual or perhaps even a nuclear family (but not always since after all we are all individuals), but how about a slightly larger group?  Depending upon its composition there are likely to be as many versions of typical as there are people. Expand this into an even larger group, say a city, state or an entire country, and it is a much more complex situation.  Earlier this week in a rare moment of television viewing I saw an AFN infomercial talking about an exchange program between U.S. Army soldiers stationed in Japan and Japanese teenagers whose lives had been disrupted by the Tohoku earthquake and subsequent tsunami and the nuclear meltdown at the Fukushima Daiichi Nuclear Power Plant.  The whole premise of the exchange program was to provide Japanese teenagers with the opportunity to spend time with a "typical" American family.  This sounds good but are these host families really your typical American family?  And for that matter, what does a typical American family look like?  In a country as diverse as ours how do we begin to identify and define what a typical American anything looks like?

Fueled by television and the movies the popular perception of a typical American family has changed over time. From the idyllic Leave It To Beaver of the 1950s to the 1980's The Cosby Show and Growing Pains and then today's Modern Family and Parenthood the idea of what a typical American family looks like has changed with the times.  There was a time when two parents with their 2.5 children living in the suburbs and dad commuting into the city with mom managing the home front all day was believed to be what the typical family looked like.  That might have been a typical snapshot of suburbia but what about the rest of the country?  What about families living in the inner city or rural areas?  In reality the differences between urban and rural, middle-class and living on the edge, married, single or something in between, and children or no children are just too much to compare.  Throw in ethnic background, education level, religion, native language and general geographic area and there really isn't a typical American family.  I look around my own American community here at the Embassy and there is so much diversity amongst us that collectively we are a hodge-podge of America.  For every health nut we have someone else whose main form of nourishment is junk food, for every church goer there is someone whose idea of going to church is touring one on vacation.  The comparisons go on.  But even then do we really represent typical America? Perhaps being a typical American actually means being atypical in nature. Perhaps being a hodge-podge is being American? After all, we are the world's melting pot.

Now back to the typical American military family living in Japan.  With less than two percent of the U.S. population serving in the Armed Forces, I would argue that this family is not representative of America's families.  Within this two percent segment of the American population there is an unimaginable amount of diversity.  The families participating in this exchange program might be typical of other U.S. Army soldiers stationed in Japan (or not) but that is where the similarities with the rest of America probably end.  That is OK; just don't go making statements about typical Americans.  If you do, I will challenge you as to what that really means.

*** According to The Merriam-Webster Dictionary.
Posted by Zosia at 18:50