Non.  Yo. No.  Twenty plus years ago under the tutelage of a teacher with a heavy Maine accent, I studied French in high school. Despite my attempts at the time, I never really became fluent. In fact, after three years of muddling through, I was barely proficient.  I could always read the language better than I could hear it and my speaking the language was always a disaster.  All of this seems to be the exact opposite of what I really need in order to be able to communicate effectively.  If I could just write messages to people I would be golden.  After years not using the language for anything other than reading an occasional sign or grocery store label, I remember virtually none of it. That became horribly apparent this week as I began what is supposed to be "refresher" lessons with a tutor. 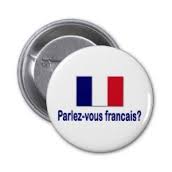 With our next assignment being in a French speaking region, I've decided that, at a minimum, I need to be able to verbally comprehend the basics of the language.  This is especially true since Sidney will be attending a French language immersion school where I will need to be able to communicate with his teachers (and him).  I will also need to speak with our neighbors, shop in the markets, and conduct all of the other daily activities where understanding the local language is necessary.  After throwing out queries to a group of local internationals I was quickly connected with a French tutor here in Tirana.  Not only is she French speaking but she is actually from France.  As I demonstrated yesterday, she certainly has her work cut out for her.  My telling her that I had studied French years ago resulted in her speaking French to me during our very first lesson.  Any French I might have known flew out the window but my Albanian suddenly became remarkably strong.  She would slowly speak to me in French, I would comprehend about half of it, then unwittingly formulate a response in Albanian.  It wasn't what she wanted to hear but my Albanian teacher would have been so proud of my correct use of both vocabulary and grammar.  When we moved onto writing simple sentences I was much better.  I could read and understand what she had written but my attempt at reciting the words to her in French sounded more like a pre-schooler learning to talk.

Sitting in my tutor's apartment I was reminded of how difficult it is for me to learn a language.  My head hurt from concentrating and much to my frustration, no matter how hard I tried, the language just wasn't coming back to me.  I know, or hope, it eventually will but in the mean time it is going to be a long eight months of lessons.  Hopefully it will pay off in the end though and I won't be quite as much a fish out of water when we land at our next assignment.  And, since everyone say immersion is the way to go, today we're headed off for a long weekend in Paris.  I'm not even going to pretend that I will be able to understand what is said to me or ask the most basic question. I will be able to read most menus though and with a few gestures, a lot of smiling and some apologizing, I'll eat well and do just fine.
Posted by Zosia at 13:00