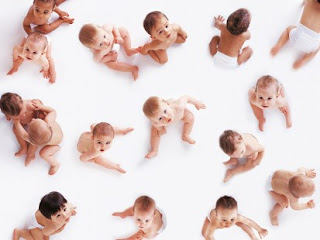 There is a baby boom going on in my midst. This is the year that my closest friends from both college and as far back as high school turn 40.  And based on email messages and Facebook announcements, it would appear that everyone is getting a baby as their big birthday gift.  Most of these friends will not be first time moms; rather they were already considered "late in life" mothers when they had their first children a few years ago.  Back then, I was a part of this baby trend.  At the time we were generally all married and had been for at least a few years. As a rule we had advanced degrees, were established in our careers, and were fulfilling all of the stereotypes that go along with this demographic.  Whether by intensive trying; sometimes with the faithful assistance of a fertility specialist, the planned natural route, or by "oops, how did that happen?" it was a busy couple of years for many of us.  And now as our babies have become pre-schoolers it would appear that the baby bug has bitten again.  Has the bug bitten me too?  Yes.  And no.  Essentially, as is the case with most things, it is complicated.

I've never hidden the fact that Sidney was conceived via IVF.  After several years of trying various methods for getting our sought after baby, luck finally was in our court and Sidney was conceived during our first attempt at IVF.  We even came out of the experience with a generous supply of fertilized embryos that we stored for future use.  While I was still pregnant the plan was to wait a year or so then try again for a second child.  But then Sidney was born prematurely.  The weeks, months, and even year that followed his birth were scary, tiring, and emotionally draining.  There was no way either of us were ready to tempt fate and go through the process again.  So those embryos sat frozen each month as we dutifully paid our "freezer fee".  We were sure that someday we would be ready but we certainly weren't during that long first year.

But of course things got even more complicated for us. We moved to Albania; a country where not only could we not utilize those frozen embryos but a place where if I was to become pregnant I would have to leave in order to receive the specialized medical care my doctors told me I would need.  Initially I was OK with this.  After all, I was still exhausted, emotionally drained, and not ready to take on the responsibility of adding another child to the craziness of our life.  And deep down, I had this hidden fear of all the things that could go wrong. I would be three (or more) years older moving me from being an "older mom" to being an even older mom.  Knowledge can be dangerous and I was so acutely aware of all of the risks for both me and my unborn child that go along with being an older mother.  Across the board statistics just weren't in our favor.  We had dodged the bullet with Sidney but would we be so lucky again?  Was it a risk worth taking?  These were the thoughts that kept me up at night while I contemplated what the future held in store for us.

Glenn and I both come from small families.  As an only child of older parents with little potential for even having cousins there is the potential for Sidney having a lonely adulthood.  But is that reason enough to have another child?  And there were still the risks and my ongoing fears.  Initially being in Albania afforded us the opportunity to not have to directly deal with all of these questions.  But gradually as we have settled into a routine we have been thinking about trying again.  After all, it would be really nice for Sidney to have a sibling and we want another child.  And I'll admit, seeing all of my friends pregnant has made me think about it in a serious manner.  Just when I thought I was ready to try again I had my own "oops" moment that predictably ended in a physically and emotionally painful miscarriage.  This incident brought all of my pains and fears back to the surface.  There just wasn't any way I could deal with that emotional and physical pain again.

So where do we go from here?  I honestly don't know.  We're continuing to pay our freezer fee and talk about our options and what the future may hold.  Since we will shortly be heading to western country with top notch health care options maybe another round of IVF is possible.  We've run through the scenarios about how we could make this work and have a plan (or course we do).  But the fear of the "what if" still permeates this option.  Perhaps we adopt.  After all, there are thousands of babies who are desperately in need of loving families.  That isn't to say that adopting is the easy route.  Having witnessed many friends go though the often emotionally painful process of adopting I know that that too could be a bumpy and unpredictable route.  Most days I think I am up for the challenge entering into the adoption process may bring but then there are days when I'm not so sure. Or we could simply keep the status quo. We are lucky to have a healthy, happy, and thriving son.  While it would be nice for Sidney to have a sibling, being an only child is not the end of the world. Without having to share our "wealth" we could provide Sidney with more opportunities than we could if we had more children.  If we surround ourselves with friends who are like family perhaps a lack of siblings and cousins would be less noticeable.  Is one choice better than another?  Are there any wrong decisions?

What I do know is that I'm not joining my friends in getting a baby as a 40th birthday gift. Instead I'm heading to Spain with a dear friend.  We will play tourist, eat too many tapas, freely sip sangria, and do all of the things that one just can't do when they have an infant.  And most importantly I will give thanks for the fact I have these choices to contemplate.  Many people just don't have that option.
Posted by Zosia at 13:11