Hanging By A Thread

Hanging by a thread is an apt way to describe my life as of late.  As is the case on occasions that are becoming increasingly more frequent, my multiple roles-- that of mother, paid employee, wife, and unpaid volunteer seem to collide in a perfect storm of too many responsibilities and not enough time to accomplish them all satisfactorily.  And despite my best efforts, lost is all of this chaos is me. So yes, you could say that I am hanging on by a thread.

For us, daily life in Albania has a somewhat regular ebb and flow.  Over the course of a month we'll have a week of relative quiet, then ones that are busier, followed by a final week where we have too many commitments and invitations and not enough hours in the day.  Perhaps it is just the time of the year or the fact we've been here long enough to know more people and therefore garner more invitations.  And yet, with an end date in sight, we are running out of the time to actually do everything we hope to.  Regardless of the cause, as of late we have been particularly busy.  Between my paid work and my own responsibilities that accompany Glenn's job, I've been flowing from organizing one event to moving right into working on another. No sooner is one complete than I'm again talking to caterers all over again, paying bills, handling R.S.V.P.s (or the lack there of), and worrying about the most minute of details for the next date on the calendar.  I've always found satisfaction in volunteering for local organizations and in an effort to give back to Tirane, got involved with a local woman's organization.  Rather than finding enjoyment in this however, it has morphed into an onerous responsibility that is leaving me feeling both frustrated and frazzled.  Adding to the "fun" is our latest round of house woes.  (Whereas most people have monthly housing inspections, we seem to have regular monthly breakages and full on replacement needs that need continual monitoring). Then there was my most recent realization that May (gulp) is upon us meaning we also need to figure out what we are doing for our summer vacation this year.  I know many  people just go with the flow when it comes to vacations but unless we plan it out in advance and make the commitment of reservations in advance, the trips don't happen.  And of all summers, this is one where we definitely need a vacation.  However, all is not lost. Unlike a year ago who I told myself that time for myself could wait for another date, I am making more time for myself.  I am now at the point of considering invitations carefully and only saying yes those that are either absolutely necessary or ones I truly want to accept.  No more going to coffees and other assorted get- togethers where I will be miserable solely because it is the right thing to do.  Life is too short to surround myself with unpleasant people or unnecessarily burden myself with additional problems. I am also blocking out weekly me time. That comes in the form of regular French lessons, something I both enjoy in the present and will find practical in the future.  Sure I should be studying (more) but in the mean time my two hours of lesson time per week are all about me.  Throw in the time I spend walking to and from my tutor's apartment and I have a total of four hours a week all to myself.  A year ago just the thought of this time would have been unheard of.  Now it is a much needed reality. 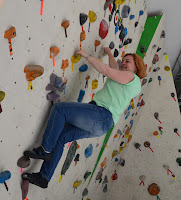 Since I've already been feeling scattered and figuratively holding on for dear life recently I decided to take the plunge and go one step further.  Last Friday I found myself really hanging on by a thread, or in this case by my (weak) hands and arms.  For the first time, I went indoor rock climbing.  I know this probably isn't much of a feat for many people but for me it was a big deal. First, I don't like heights, preferring to remain safely on the ground whenever possible. Second, I lack any upper body strength so the prospect of being off the ground while supported by my own body strength was a bit unnerving.  So there I was, at the Rock Tirana Climbing Gym, participating in an attache social event that Glenn and I had organized.  In what was clearly a case of "it seemed like a good idea at the time", we had decided to take everyone rock climbing as a part of the monthly social gathering we had been tasked with hosting.  It was different from the usual dinner out and I thought it would be fun for kids and kids at heart.  And then I found myself in the gym staring at a tall wall filled with hand and foot holds.  The thoughts of "too old" and "too out of shape" immediately came to mind.  But since we were the hosts and I was determined to at least try climbing I gave it my best shot.  So this out of shape, short-limbed woman hoisted herself up the wall.  It wasn't easy; I struggled to find hand and toe holds that I could reach, and I most certainly didn't want to look down.  Just thinking about it paralyzed me.  By sheer determination, however, I managed to make it to the top not once, but twice.  I felt silly but proud of the fact that I did it (and did it again).  The owner of the gym told me that if I came back more often it would become easier over time.  I'm sure it would be; however I think I'll save that for someone else and spend my "me time" elsewhere.
Posted by Zosia at 13:56