Confessions Of A Recovering Shoe-A-holic 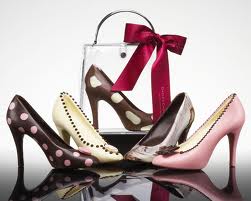 I am a recovering shoe addict.  There I said it.  I say recovering since, while I still absolutely adore shoes, they don't excite me the way they used to. Perhaps my love of shoes is a direct rebellion against my anti-fashion mother because the minute I had any disposable income I started buying shoes.  Sky-high heels or ballet flats, it didn't matter.  As long as they were cute they were the shoe for me.  From an early age I've always noticed what other people are wearing on their feet and right or wrong, quickly pass judgement on what I see.  As someone who firmly believes that athletic shoes should only be worn when actually performing an athletic activity, I am quick to notice whether or not the shoes match the occasion.  A cocktail dress is ruined if it isn't paired with an appropriately dressy pair of shoes.  Scuffed shoes closed with Velcro strips do nothing for a man wearing a suit.  I often feel as though people forget to look down once they are dressed and throw on whatever pair of shoes they have available.  Wrong. Wrong. Wrong.

In my single days I thought nothing of dropping a large chunk of change for the perfect shoes.  After all, what else did I have to spend my money on?  The higher the heels, the more unusual in design, generally the more impractical the better was my motto.  While I loved a good sale if I saw the perfect pair I would buy them immediately.  As so many young adults do, I moved often in my twenties and my number one priority in selecting a new home was the availability of space to store my shoes.  I needed shelves.  Because I always kept the shoes stacked in their original boxes--label side out of course-- I found myself continually on a quest to find the perfect storage space to accommodate my ever expanding collection.  Yes, I turned down more than one otherwise perfectly acceptable apartment because the storage space was utterly inadequate.

When I met Glenn I was simultaneously horrified yet pleased with what I saw.  The man only owned a couple of pairs of shoes and bragged that he hadn't bought any in several years.  (In fact, with the exception of a pair of running shoes I bought and shipped to him while he was deployed, we had been married for five years before he even bought himself a new pair of shoes).  However, he never wore sneakers unless exercising and in true military fashion, his shoes were always shined to perfect precision.  That my friends, is a good thing.  And when we agreed to move in together he ceded three quarters of his closet space for my shoes.  I was in love. Of course as I got organized in anticipation of the big move, I realized that I owned over two hundred pairs of shoes.  Gulp.  That was bad. It was one thing to look at my extravagant collection and receive occasional complements on my footwear but it was another thing to have someone else looking at the wall of boxes every day.  As hard as it was I did what I had to and did my first major purge of my shoe collection. Out went 120 pairs--many in pristine condition---donated to charity and I moved with a respectable (???) 80 pairs.  My mother knew it was serious since I had never met anyone before who inspired me to get rid of my precious shoes.

Fast forward a few years.  Still in the workforce, undergoing a very long deployment all alone, and working within proximity of the largest mall with the best selection of shoe stores in Hampton Roads, my number of shoes gradually crept up.  When Glenn returned from deployment he looked quizzically at the stacks of shoe boxes in the closet but said nothing.  Instead he set about designing an enlarged master bedroom suite with a walk in closet that would accommodate my shoes (and his as well).  But then I got pregnant and a sad thing happened.  With my pregnancy came bloating and swelling that made it impossible for me to wear any of my shoes.  Under duress (and pain) I dutifully went to Nordstrom's where I purchased a pair of black Dansko clogs. They were ugly but I hate it admit it, comfortable and I found myself wearing them exclusively for the remaining months of my pregnancy and beyond.

Much to my dismay, when I returned to the point of wanting to wear cute shoes again, none of them fit. Yes, in the course of my pregnancy my foot had increased by half a shoe size making all but a handful of my beautiful shoes unwearable.  I was horrified but continued to try to squeeze into them on occasion while those Dansko clogs became my staples.  I could have replaced some of them but a collection that has been amassed over many years is not easily replaced.  Besides, with a child, I had other things to be spending our money on.  Unable to part with them I moved them all overseas with us and stacked them in piles in our wardrobes.  Every once in a while I would break them out for a reception only to regret it later.  Not only were they horribly uncomfortable but walking in heels on Albania's broken streets and sidewalks means taking your life into your own hands. Desperate for comfort and practicality I discovered Clarks, a good old European shoe that was study enough to withstand Albania (and the rest of Europe's) rough-on-shoes surfaces.  The shoes aren't sexy or cute but they work for my current lifestyle.  (If my twenty year old self could see me now, she would simply die).

As we prepare to move again, into a house that will be much smaller than what we have now, I made an important decision.  I was going to truly purge my shoes once again (and then some).  Anything that didn't fit, wasn't comfortable, or I hadn't worn since we arrived in Albania would be donated.  So last night while my boys were out I steeled myself with a glass of wine and set to work.  Unceremoniously I went through all four of my wardrobes and discarded shoes that I had forgotten I had even owned.  As I opened the boxes I peered at footwear that I didn't even remember buying, couldn't imagine having bought, or looked at lovingly.  It was hard but I did it.  In the end over fifty pairs of shoes left the house last night.  Will I miss them?  Probably not.  I'm sure at some point in the future I will be looking for that pair that perfectly matches a dress and wonder where they went.  I know that when it comes time to move I will not have to endure the mutters of astonishment from the movers. (Yes, it doesn't matter what language you speak Mr. Mover, I know you are passing judgement on the number of my shoes).

I still love shoes and am horrified that my son only wants to wear sneakers with everything but I know that my shoe phase is behind me.  It was fun while it lasted but now my middle aged feet are thanking me for finally realizing the wisdom that comes with wearing sensible footwear.  They may not be the sexy sky-high heels of my twenties but they are the perfectly appropriate--and comfortable-- footwear that makes this temporarily living in Europe mom's feet happy.
Posted by Zosia at 17:28