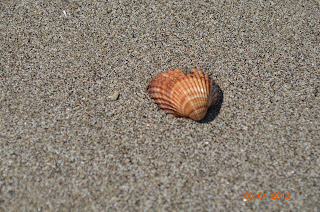 Yesterday we went to the beach.  Sure it is only April and the temperatures were far from what is typically considered beach weather but it was sunny and after a harried week, we just needed to get away from Tirana, the chaotic crowds, and daily responsibilities.  And to be perfectly honest, this pretty much the only time I will go to a beach.

When we first told people we were moving to Tirana, those people who were  familiar with Albania's location asked if I was excited about having easy access to the Adriatic and Ionian beaches.  Up to that point I hadn't even given them a thought since I am not a beach person.  I love being near the water, hearing the sound of surf crashing, and feeling grains of sand squish between my toes.  However, the mere thought of sitting in the hot sun for hours on end is enough to send me running for cover.  No matter how much or how strong the sun screen, within a half hour of prime time summer beach time, my entire family will have turned the color of boiled lobsters.  Idly sitting in the shade of a beach umbrella, which again does little to protect me skin, doesn't do it for me either.  Neither do the sweltering crowds, running children kicking up sand, and sketchy boardwalks that accompany so many beach areas.  We lived a few miles from Virginia Beach for years yet the only time I ever ventured onto the beach was when my parents visited and insisted they wanted to go to the beach.  The week we rented a beach house on the Outer Banks of North Carolina was the longest week of my life; too much sun, sand, and heat and not enough activity had me going stir crazy by Wednesday.  But the beach in April is just perfect for me.

In fact we visited not one, but two beaches yesterday. First up was Spille Beach.  Located outside of Kavaja, we had this stretch of sand completely to ourselves.  Much to this New England conservation girl's chagrin, we drove right onto the sand before getting out to explore.  Although breezy, the weather was perfect.  The surf was a big rough and had washed a nice selection of intact shells onshore.  Of course, this being Albania, the beach itself was not immune to trash. Household garbage, hypodermic needles, dirty diapers and an inordinately large number of shoes were scattered along the sand.  Although I wasn't surprised, the sight of all of this trash made me inordinately sad.  I can only hope that the beach was covered with debris because it isn't yet true beach season.  The thought of basking bodies laying amongst the beach debris is too much to contemplate.

Next up was our real destination, the Karavasta Lagoons located in Divjaka Pines National Park just west of Lushnja.  I had read about this nature preserve and had been wanting to visit for some time.  I had the hopes of seeing the endangered Dalmatian Pelicans who winter and breed in this lagoon.  Unfortunately we couldn't find any but I loved being out on this vast and much cleaner beach.  Again we drove right down to and into the water.  This being Albania, we were joined by a handful of Mercedes sedans filled with young and old men alike, driving along the sand.  We have visited several other national parks here in Albania and I have always been happy to see that these areas are cleaner and better maintained and preserved than the rest of the country.  The Karavasta Lagoons and beach area were no exception.  Here we explored the vast dunes that were relatively clean when compared to the beach in Spille.  Birds were scarce but brightly colored spring wildflowers were abundant.  A ramshackle camp of sorts perched on the dunes sported so many tables and chairs that I could only surmise that this was a cafe/bar/restaurant of sorts.  We bypassed this dining option and instead ate a tailgate lunch of bread, cheese, and salami while watching a local fisherman launch his boat into the crashing surf.  More rocks and sticks were thrown into the water.  We even spotted a cluster of old bunkers perched on a narrow spit of land separating the lagoon from the Adriatic Sea.

For me, yesterday was the perfect beach day.  It was warm and sunny but the breeze kept both the temperatures and the infamous Karavasta Lagoon mosquitoes at bay.  Far from the smog and pollution of Tirana, the sea air was clean and fresh.  After a long rainy winter if felt so good to be outside.  The vastness of the beach provided us with a landscape for running and playing that just isn't possible in our neighborhood.  Fancy vacations and exotic get aways are nice but as was evidenced by Sidney's excitement, sticks, stones, and a bit of water can make for a wonderful day.  Since it is doubtful that we will return to the beach during the warm weather months, this might have been our one and only beach trip while in Albania.  And despite the slight sunburn I received, it was perfect.