When driving around Tirana on a typical day, it is easy to forget that it has only been a little over two decades since Albania emerged from her half a century of dictatorial imposed self-isolation.  On the surface the hustle and bustle of the traffic clogged streets with too little parking, meandering pedestrians not paying any attention to the a fore mentioned traffic, and ongoing construction and renovation of buildings looks like any other bustling city.  Upon closer inspection, however, you do notice that there is an unstructured chaos that only comes from the too rapid and unplanned development that permeates every inch of Albania's cities.  Urban centers are expanding their reach into what was once pristine countryside at a heartbreaking pace. It feels as though Albania is trying to make up for lost time and recapture that lost half century in a matter of years.  And some day--OK, many days-- this explosion of chaos is suffocating and unbearable. But a brief reprieve is easy to find since all you have to do to escape the chaos of the city is to drive a few kilometers in any direction and it is as though you are entering an entirely different world.  This is what I love about Albania; two very different worlds are often separated by a few mere kilometers. 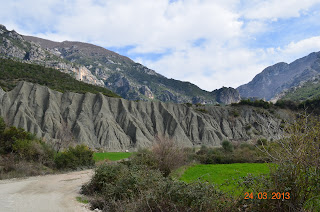 During a break in the weather on a recent weekend, we decided to get out and explore.  After consulting with Google Maps, Glenn selected a route that essentially took us through a valley and behind the mountains directly to the west of Tirana.  We have been looking at these mountains from our balconies since we arrived here but had never ventured into them.  Driving out of Tirana we quickly (as in mileage, not time) left the urban sprawl behind us and soon found ourselves in what is now the suburbs, but a few short years ago would have been considered the country.  In their attempt to expand and modernize, new roads are being constructed everywhere throughout Albania and we found ourselves on one of them.  All of the road had yet to be paved but the portion that had been graded was wide and as smooth as gravel could be.  (Because there are so few roads in this country, roads are used as they are built; rather than keeping a road closed until it is complete, traffic shares the same space with construction equipment, farm animals, donkey carts, and pedestrians).  Quickly all of this ended and we found ourselves "detouring" along a narrow muddy outcropping with the raging river below us.  Then driving through a partially completed concrete tunnel, we were thrown back in time.

Emerging from the tunnel we found ourselves on a very narrow rutted "road" that meandered along a dry stream bed and through occasional settlements of clusters of three or four stone houses.  Each settlement had at least one Albanian style outdoor cafe with old men sitting in chairs around a decrepit table.  More often than not there was also a mosque.  Dogs and children roamed freely and at each location everyone stopped what they were doing and stared at us as we bounced on by.  Rickety electrical poles dotted the roadside but close inspection revealed the lack of wires connecting them.  Other than an occasional furgon, we were the only vehicle on the road.


We weren't really sure where we were going but kept driving along urged on by the pointing fingers and waving arms of the people we saw along the way.  Sometimes we came to a true dead end and turned around.  Other times our dead end was caused by a building that had been constructed in the middle of what had been the road.  After reaching a dead end that was some one's front yard, we back tracked and corrected our route.  Foolish us; we hadn't realized that the road was in the currently dry river bed.  (I don't know what happens when there is actually water in the river).  Coming up out of the river we crossed a bridge whose safety I questioned and found ourselves even farther back in time. Here it really felt as though the passage of time had stopped generations ago.

We were still on a road but the road was getting narrower and narrower with each passing kilometer.  Sometimes we couldn't even see where the road was so we made our way by feel --- and by what looked like the safest route.  We drove between waterfalls and sheer cliffs, through rapidly running streams, over boulders, and around fresh landslides.  At this point we weren't even seeing any furgons and couldn't tell when the last time another vehicle had come through the area.  We would bounce along, for what felt like hours but was more likely minutes, through rocky hills before entering into small enclaves of a few houses and barns surrounded by small fields. Traditionally dressed peasants were tending their spring crops but all work came to a stop as they stared at us as we passed.  Some electrical poles now had wiring but most didn't.  As evidenced by the young boys who took pictures of our passing vehicle, cell phones were readily available so there must have been some form of electricity.  This scene was repeated over and over and felt both surreal and as though our mere presence was imposing on a way of life.


The scenery however, was absolutely breathtaking.  The day was crystal clear and for as far as the eye could see there was nothing but snow capped mountains, arid rolling hills, and small patches of greening farm land.  Peering into the distance mountainsides one could make out clusters of red tiled roofs and the white mosques that are found in just about every settlement we passed through.  What I didn't realize as we went up and down spotting in the distance.  The bouncing and jostling of the vehicle became monotonous but the views, varied topography, and enchanting settlements certainly weren't.  We never knew what we would find around the next corner.  A building?  A farmer?  A farm animal?  A road block? Who knew?  At one point our road turned to cobblestone switchbacks and we realized that we were in fact driving on the remnants of an ancient road that had probably been travelled by the conquering Ottomans.  Geographically we were due west of Kruja so I found myself wondering whether the Albanian national hero Skanderbeg had ever travelled this route with his army.  Ever the history buff I started thinking about how amazing the possibilities were.

That Sunday we spent a total of six hours in our car yet we barely covered fifty miles, a third of which was on the paved autostrade on our return trip from Kruja to Tirana.  It felt as though we were a thousand miles away from the hustle, bustle, and congestion of Tirana yet in reality, we were most likely never more than ten to fifteen miles from the city center.  Tirana and these tiny hamlets are separated only by mountains yet culturally they couldn't be farther apart.  As Glenn pointed out, it is likely that we travelled a farther distance on that one afternoon than most of the peasants we passed ever had in their lifetimes.

Our ability to take this short trip back in time is yet another one of the things I love about Albania.  Where else can you see such contrasts of modern and ancient in a natural state in one day?  Unlike the living history museums showcasing traditional life that are found in so many countries, this Albanian living history museum is the real thing.  Those aren't paid docents working the fields; rather generations of family members are farming and working the soil in order to feed themselves the way they have from hundreds of years.  Of course it is the geographic inaccessibility of the country's landscape that has preserved this traditional pocket of Albania.  With a new road being laid nearby, I wonder how much longer this way of life will continue to exist.  As is evidenced by the sprawl of Tirana, once it is gone, it is gone forever.