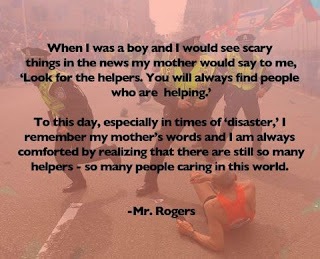 Not again.  That was my initial thought last night when I heard the breaking news about the bombings at the finish line of the Boston Marathon.  Although thousands of miles away from Boston, the city had been on my mind all day.  As a New Englander through and through, Boston is my all time favorite city and is never been far from thoughts.  During my twenties I spent a lot of time in this historic city both professionally and personally and have viewed my share of Boston Marathons and Red Sox games.  Early in our relationship I made a point of introducing Glenn to this city I love so much.  Once I moved away from New England, Boston became a vacation destination or at least brief stopping point when passing through.  As a child, the third Monday in April always marked the beginning of spring vacation week and Patriot's Day, that uniquely Massachusetts (and Maine) holiday marking the Revolutionary War Battles of Lexington and Concord.  Although not a runner, I have many friends who are and who regularly take part in that 26.2 mile trek.  Yesterday I had been reading Facebook updates throughout the morning from friends who were lining the route and cheering on runners simply because that is what you do in Boston on marathon day.  Many joke that it is really the marathon that makes the day a state holiday since like a religion, New Englanders take all of their sporting traditions very seriously.  So yes, Boston was already on my mind before the heart breaking news was announced.

Emerging news reports are continuing to provide conflicting information but the general consensus is that three people were killed and one hundred and forty-four others received permanent, and in some cases, life threatening injuries in yesterday's blasts.  Once again I find myself wondering what would drive an individual (or a group) to such lengths that inflicting mass harm on innocent people is their only answer.  Why people, why? What did anyone ever do to you to cause such pain?  While the physical injuries are limited to innocent bystanders, the emotional ones run much deeper and literally span the globe.  Like so many other Americans I am left feeling fragile and uncomfortably vulnerable as I wonder when the next tragedy will strike. And yes, I say when, not if, since our tragic history has a way of repeating itself all too often.  As I have seen, and felt, all too often in recent years, when something incomprehensibly tragic befalls us we step back, seek comfort and solace then reassess our circumstances.  Security measures may be increased, as a society we walk around on eggshells for awhile while we remain extra vigilant, and we may temporarily change our ways.  But soon, as the horror fades to a distant memory, we resume our daily lives a little less innocently until a new horror reemerges in a slightly different, but none the less traumatizing form.  This is no way to live.

But, out of every tragedy emerges an unimaginable showing of human kindness.  This was immediately evident yesterday as the media showed pictures of complete strangers assisting, tending to, and comforting each other.  Without giving it a second thought strangers rushed to help other strangers as clothing was stripped off of bodies in order to create makeshift bandages, physical wounds were tended to, and emotional ones triaged.  Perhaps it is a spontaneous unification against an unknown force of terror but for a brief time amidst all of the horror, politics, race, and religion are forgotten and being kind and good to each other is all that really matters.  It doesn't matter what the stranger next to you looks like; if they need help, someone is there to help them.  I remember sensing this compassion after September 11th and again in the years since after disasters, either natural or man made, have struck communities.  This provides me with a small sense of comfort that there really is good in our world.

As a New Englander, Patriot's Day is the ultimate patriotic holiday and it crushes me that this day is now tainted with such horrific violence.  I am sending my thoughts and love to all Bostonians, New Englanders, and Americans out there.  I strongly believe that out of adversity comes strength and as history continues to prove, we are one tough lot.
Posted by Zosia at 16:33