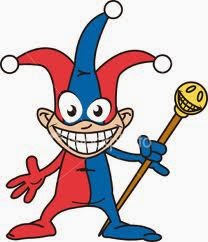 Better a witty fool than a foolish wit.

It is the first of April, the beginning of a new month that promises to be sunnier and springier than its predecessor,  and yes, it is also April Fools Day.  What exactly is April Fools Day you ask?  It is a day filled with pranks, (hopefully) harmless jokes, and good natured fun.  They may be as simple as a joke or elaborately orchestrated with props and numerous actors.  Perhaps they are  spontaneous and implemented as the right moment arises or well thought out with extensive planning taking place.  But in the nature of April Fools Day, they are all carried out in good fun.  And interestingly enough, this unofficial "holiday" is recognized around the globe in various forms.  Who knew that such a silly day could be the one thing that unifies countries as diverse as the United States, the Philippines, Iran and every country in between.

Chaucer's 1392 Canterbury Tales provides the earliest references to pranks taking place on the first day of April.  During the Middle Ages,  the March 25th Feast of the Annunciation, ended with festivities and frolicking on the first of April.  April 1st is the thirteenth day of the Persian New Year and as such on this day, Iranians celebrate  Sizdah Bedar by playing jokes on each other.   Pranks transcend age in Europe where in Italy, France, and Belgium adults and children alike pin paper fish onto each other's backs and shout "April fish" to one another in their respective language.  Legend has it that the British first introduced the concept of April Fools Day to the Philippines during their 1760s invasion of the islands.  Now Filipinos mark their pranks with splashes of yellow, thus informing their unwitting victims that they are just joking.  The Scots play the April Fools game in a manner reminiscent to the children's game of "telephone." Messages requesting help are delivered from person to person with the correct response being the need to contact someone else, thus continuing the game.  In Poland, the media and even public institutions will get into the game with parties sending out false messages and news.  It makes me wonder what would happen if real news did need to be spread on the first of April.  Would any Poles believe it?  How would you be able to differentiate reality from fantasy?

Although not a holiday per se, April Fools Day is my type of holiday.  I eschew the heavier pranks but adore the idea of good natured fun.  More importantly, I love that such a simple concept is carried out in similar fashion throughout the world.  The day seems to transcend continent, politics, religion, and age.  What else can lay claim to doing the same?

April 1.  This is the day upon which we are reminded
of what we are on the other three hundred and sixty four.