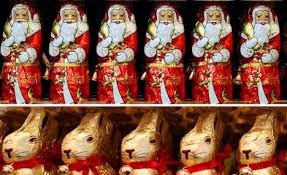 Call me a cynic but I just can't embrace the Easter Bunny. Or Santa Claus either for that matter. While both Easter and Christmas are rooted in Christian traditions somewhere along the line the original intent of these religious holidays got hijacked by mass consumerism making their focus gift giving. It isn't that I don't love celebrations and festivities; rather I have a hard time getting into the spirit of an event whose main focus seems to be buying and giving unnecessary items. And since most of these celebrations were originally centered around a Christian religion that I do not practice I feel even more removed from the celebrations. But I have a very aware little boy who sees his friends celebrating these annual events and naturally he wants to be a part of the fun. So what is a parent to do?

With Christian Easter being celebrated this weekend I've been struggling with just how we should recognize the holiday in our non-religious household. In past years we've simply ignored it and treated it as any other Sunday. (Well, under the auspices of my old job I was required to organize a community wide party around Easter which I did but the celebrations never crossed our doorstep). But this year Sidney is so aware of the Easter Bunny and has been talking about chocolate eggs and other sugary treats. He gravitates towards the pastel colored displays in the stores and asks when the bunny will bring goodies to him. He spies the chocolate crosses that are just as prevalent as the eggs, chicks, and bunnies but doesn't distinguish between them; to my four year old they are all just chocolate. And he loves chocolate.

So how do we not make our little boy feel like his is missing out on something that everyone else is experiencing. Without a deep religious faith it feels hypocritical to be celebrating Easter. (And I still don't see the connection between the resurrection of Christ and an adult sized rabbit). We want Sidney to decide for himself what he believes and I don't want commercialized costume characters to influence this. After much deliberation our answer is to hold our own small egg hunt in the backyard. We'll fill eggs with small treats and toys and let Sidney burn off some energy trying to find them. Rather than putting the focus on a Christian event (sorry son but you won't be finding any chocolate crosses in those eggs) we'll call it a celebration of spring. Hopefully the predicted rain will hold off and perhaps the sun might even shine for a bit in Belgium. I know that eventually we will have to explain the real meaning behind the holiday to Sidney but for this year I think we will be getting a pass on that conversation.


And in closing, this pretty much sums up how I really feel: 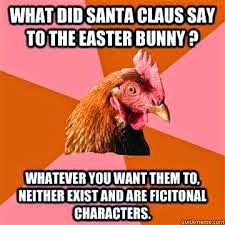