One of the things I've found most refreshing about being in Belgium is the overall adherence to traffic rules and laws. Now let me back up and please don't laugh just yet. Prior to our arrival here we had been warned about the horrible roads, disrespectful drivers, and overall unpleasant traffic conditions in Belgium. I guess it is all a matter of perspective since after being in Albania for so long, I feel as though, with a few exceptions, drivers here are law abiding. Sure people speed but when it comes to other rules of the road--yielding to the right, using signals when turning, always stopping for pedestrians in the crosswalks and parking legally, Belgians appear to be pretty darn good. And with narrow streets, bicycles sharing the said streets and tucked away parking garages requiring tight maneuvering, parking in legal spaces is strictly adhered to and if not, quickly enforced. At least this is the case in most places.

Ironically enough, the single worst place for finding parking offenders is on our military base and the problem is particularly extensive in the school zone. Like school drop off zones across the world, each morning finds ours clogged with buses, pedestrians, bicycles and cars. There are simply too many cars and not enough convenient parking spaces. Everyone always seems to be in a rush, the weather is often less than pleasant making parking as close to the school as possible quite desirable. Morning drop off options are either to get there really early in order to secure a parking spot, park at the bottom of the hill where there are always plenty of empty spots or sit in the long line of vehicles that will inevitably cue up just waiting for an empty and convenient space to materialize which only adds to the confusion on the one way street. (I quickly discovered that it actually takes less time to park farther away and walk, sometimes with an umbrella in hand, than it does to sit in the long cue of vehicles coveting a more convenient parking spot). Or you can park illegally because, while not right, it is personally the most convenient option. 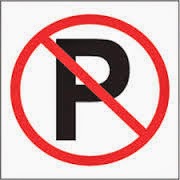 This blatant ignoring of the  parking rules riles me to no end. When I see able bodied people (especially those wearing military uniforms) stop their vehicles in the no parking or buses only parking zones, or even worse in the crosswalk, then hop out of their vehicles, it drives me crazy. No, putting on your flashers does not suddenly make your parking job legal. Sure it isn't any fun walking up the hill in the rain nor is it always convenient with a small child or two in tow. (New flash! We all have children in tow). But the rest of us manage to do it every day so I'm not sure why those of you who offend think you are so special and can flout the law. But apparently there are people who think they can because they continue to park in such a manner that inconveniences and even endangers us all.

But I am hopeful that this is all changing (it is probably only temporary but I'll take what I can get). Yesterday morning the police were actually out enforcing the parking rules. (A few weeks ago the same base police were running radar in front of the school after a spate of speeding complaints surfaced on Facebook and since then cars seem to be moving somewhat slower). I didn't see any tickets being written or cars being towed but I did observe several heated conversations between the police, who were doing their jobs and enforcing the rules, and the drivers who obviously thought they were in the right. I'm not sure why people think it is a good idea to engage in an argument with the police at any time but especially when parked in front of your child's school. Especially when you are clearly in the wrong standing next to your offending vehicle. I really find it disheartening when the illegal driver doing the yelling is standing there wearing a military uniform. I mean really, what type of example are you setting for anyone? And I can only imagine the excuse you are giving for your unlawful behavior.  You are late? Sorry to tell you but your encounter with the police is only going to make you even later. You didn't want to walk? Perhaps you need to go to the medical center then. Everyone else is doing it? Um, I don't think so. Two of the encounters I observed, one on my way into the school and the other on my way out involved American military members and were particularly ugly. I was simply embarrassed by the entire scene. Hearing the first one Sidney asked my why the man was yelling at the police. I gave Sidney my most educated explanation--that the police were asking the man to move his car because he wasn't parked legally. With the innocence of a four year old Sidney informed me that the man was bad, shouldn't yell and should go park in a good space. I couldn't agree more.

So please, if you have two feet and can use them, do so. Don't let the weather, running late, being lazy, or it being inconvenient be an excuse for breaking the law. Set a positive example for your children, your peers, and your community. If the rest of us can walk so can you.
Posted by Zosia at 08:53