You Are Not Alone: National Infertility Awareness Week 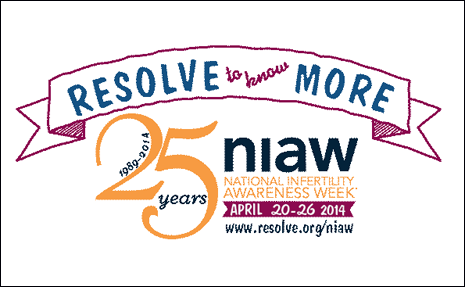 Today we are wrapping up the 25th anniversary of National Infertility Awareness Week. A lot has changed in the past 25 years with advances in science, technology, and social awareness making it possible for millions of people to become parents. And each year brings about new medical advancements. Procedures that weren't possible just a few years ago are now common place. But as is the case with all things medical, these infertility comes with a steep price tag both physically and emotionally. Weeks like this help increase education and raise general awareness on the issue that eases some, but not all, of the emotional pain associated with this disease. (Knowing you are not alone is an amazing feeling). And, thanks to raised awareness, health insurance plans are increasingly covering the costs of infertility treatments, thus easing the financial burden associated with prolonged testing and treatments.

As many of my friends know, this is a subject that is near and dear to my heart and incredibly personal. I suffer from infertility as do too many of my friends. But thanks to advancing medical technology, I am now a mother. My journey wasn't easy; it was long, painful, expensive and lonely, but these costs were worth it because in the end I was rewarded with a baby. Not everyone is so fortunate. So in honor of this week, I'm reposting my story. I've shared it before but because education is so important, I'm sharing it again:

According to the Center for Disease Control, an estimated 6.1 million women in the United States between the age of 15 and 44 have difficulty conceiving and staying pregnant on their own. I am one of those women.  Today, thanks to my amazing doctor at the Beach Center for Infertility, I am fortunate to have an active, healthy 4 1/2 year old. Because this week recognizes the struggle that the 6.1 million of us endure, I am sharing my own deeply personal story.

Before Sidney was born,  I spent several years unsure as to whether I would ever become a mother. Like many women my age, I spent my 20s trying not to become pregnant but once I was in my 30s and married, the time seemed right. Or so my mind thought but my body did not agree. While so many of my friends and neighbors had their first, second, and even third children, Glenn and I weren't so fortunate. We were hopeful and tried to remain positive but as each month was met with another crushing disappointment our hope began to fade.

At this time we were living in Norfolk, VA which ironically enough, happened to be a hotbed for cutting edge reproductive medicine. (I didn't realize that in vitro fertilization was pioneered at Norfolk's own Jones Institute). After a series of miscarriages, my doctor referred me to a reproductive endocrinologist. Dr. Flood was warm, welcoming, and supportive and together Glenn and I set about a course of action to overcome the "unexplained" infertility obstacle that stood between us and our much wanted baby. Over the next 18 months I underwent two surgical procedures, had more blood work drawn and spent more time in doctor's waiting rooms than any person should ever have to endure. I overcame my fear of needles and became an expert at self injecting hormones several times a day. I also became an emotionally charged wreck. Probably much to Glenn's relief, he spent a good portion of this time period out at sea and wasn't home to suffer the emotional mood swings that became a daily part of my life. Just a few months into this process my body began to feel like a pin cushion that had been invaded by an alien yet there still wasn't any baby.

Everyone deals with infertility in their own way. Some people talk about their experiences openly while others endure the pain privately. To a great extent, I chose the later. Our families and a few close friends were generally aware of what we were going through but for the most part, we didn't talk about it. Unless you have experienced the infertility roller coaster, you truly can't understand what it is like. It is also a deeply personal subject that more tactful people are often uncomfortable discussing.

During this dark period the comments I did hear ran the gamete form positive to negative and just plain strange. More supportive friends assured us that we would become parents while a particularly callous former friend informed me that God obviously didn't think we would be suitable parents so he was preventing it from happening. Upon hearing this, I was actually speechless for one of the few times in my life. In what I hope was meant to be a supportive comment, my in-laws even told me that they would be able to accept any child we might adopt as a real grandchild. In social situations with people we only casually knew the inevitable question was when were we going to having children. After a time I started bracing myself for these inquiries by having a slew of ready to respond quips in mind. During this time I was an overly hormonal woman so many of these comments did not sit too well with me.

Instead of reacting to this array of comments, I withdrew into myself. I sent generous gifts to baby showers but couldn't bring myself to attend. I spent hours scouring the Internet searching to possible answers. I convinced myself that if we just kept trying it would work. I continued to change my diet, exercised more, lost weight, and spent numerous sessions in acupuncture all in hopes of making my treatments work. I was convinced that the third time would be the charm but as the third assisted try turned into the fourth, fifth, and even sixth attempt my body continued to fail me. Through daily emails and the occasional long distance phone call, Glenn and I discussed how much longer we should try. After all, this whole experience was taking a physical, emotional, and financial toll on both of us.

As I waited for Glenn's return from deployment, I covertly began to explore the option of adoption. We were open to the idea but decided to give our current routine one more go before moving on. Good things can come to those who wait because upon Glenn's return, we started a final round of injections, blood work, and anxiety riddled waiting. This time luck was on our side and IVF worked its magic. We were pregnant. It is impossible to describe the sense of elation I felt that hot June day as I sat in my car in the parking garage talking to Jessica from Dr. Flood's office. (This was the only place I was guaranteed some small amount of privacy and I had been steeling myself for making what turned out to be the most pivotal phone call of my life).

All of this brings me to where I am today. My heart continues to ache for those women whose desires to become mothers go unfulfilled.  I have felt both your physical and emotional pain. I know I am one of the lucky ones. Because of this experience, I will never take anything for granted again. In a perfect world we would all be able to readily have the babies we want when we want them. In lieu of this perfect world I wish for understanding, compassion, and continued medical advances in the field of women's health and reproductive medicine. In the meantime time I hug Sidney tightly each night and silently thank everyone who helped make his existence possible.