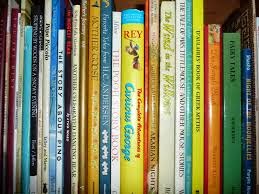 In today's fast paced, electronically driven world a sticks and bricks library might seem a bit passe. I mean, does anyone use libraries any more? Paper encyclopedias are all but obsolete and when I want to read a book I download one instantly onto my Kindle. Because of this is has been years since I stepped foot in one. But thanks to my son and his love of books I recently found myself exploring our local base library and was instantly reminded of everything I had been missing.

As a teenager I was a latch key kid whose house was literally in the middle of no where. Rather than sit at home after school I would walk to the local library to wait until my mother finished work and could give me a ride home. The library was cool in the summer (it was one of the few places around that actually had air conditioning) and warm in the winter and at times it felt as though I was a regular fixture. It was small but had subscriptions to all of the magazines we didn't get a home so I could easily spend hours pouring over the pages of Seventeen (hey, I was a teenager after all), Savvy, and yes, Cosmopolitan. Of course I did my homework as well and as this was back in the day before the Internet, relied heavily upon their encyclopedias and microfische archives for my research papers.

Skip forward a few years and I found myself at a college whose library was rated one of the most beautiful college libraries in the country. Ever the studious person I spent hours in this library as well, eschewing the periodicals but studying, researching, and hanging out with friends. I literally spent entire weekends in the library (including one long cold overnight!). The library was filled with hidden nooks, lots of study spaces, and most importantly, comfy chairs and during crush times at the end of the semester you had to get there when they opened in order to stake your claim on a seat for the day. During my tenure the library was expanded and modernized with the Dewey decimal giving way for a computerized card catalog. And speaking of computers, at the time, the library was the only place on campus with Internet access and our own peculiar email system called Pine. I researched my thesis on the ancient microfische system in the the bowels of the library and spent hours producing handwritten letters to family and friends. (Again, this was before everyone had an email account). Needless to say, the library was an integral part of my college years but by the time I returned to graduate school a few years later library archives and encyclopedias were on line and in my mind, libraries were obsolete. That was until recently.

Looking for activities to entertain Sidney I discovered that the base library hosted a weekly story hour for kids his age. Wanting both socialization and educational opportunities I figured this would be a good activity for him. We went to one and he loved it but what we discovered was so much more. The library has a fantastic children's section with two separate rooms for both toddlers and older children. The shelves are lined with books and the chairs and tables are all proportioned for their small patrons. After our first visit Sidney left with an armful of new books and we've been returning weekly for more. When Sidney asked questions about the human body (his latest obsession) we found the answers we were looking for in brightly illustrated, age appropriate reading material. In anticipation of their spring concert, Sidney's pre-school class has been learning the words to the Mary Poppins (in French of course). When he wanted to watch the movie in English, we found just what we were looking for at the library. In my search for Mary Poppins I discovered that not only does the library have an entire section of new release and classic movies in DVD format but they also have game cartridges for the Wii, PlayStation, and other game consoles. I just might never have to buy another movie or game again. But the library has things for adults too. In addition to books in all the languages of the NATO countries, I can borrow and download books for my Kindle. How cool is that? I am so happy with my recent discovery and I suspect that our entire family will become regulars at our local library.